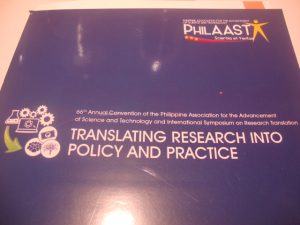 Pasay City- the sapal or coconut pulp that is usually consider as trash in wet and dry markets has made tremendous impact through the brilliant research made by one of the winner in the Gregorio Y. Zara Award in Basic Science Research given to Dr. Trinidad P. Trinidad at the 66th Annual Convention of the Philippine Association for the Advancement of Science and Technology and International Symposium on Research Translation with the theme “ Translating Research into Policy and Practice” which co organize by the National Academy of Science and Technology ( NAST).

The biggest challenge faced by researchers is to have their researches translated into policy and how business and industry can benefit from them.

In an interview on www.diaryongtagalog.net to Dr. Trinidad’s at a press conference associated with the event she says that any variety of coconut can be use but according to her studies it’s the tall variety used for copra or the typical tall coconut.

CNTV: The rise of a Taipan in Prime Time Free TV

Manila- Taipans are considered to be the leaders in business and entrepreneurship here in the country, and they are successful Chinese-Filipino.

Hence a new “Taipan” will rise over primetime free television with an Exclusive Special Preview during the Chinatown TV launched “CNTV” at the Winford Hotel and Casino recently. Of the 16 year of being the first Trilingual Filipino-Chinese News.

This coming October the program will be aired over weekdays ( Monday to Friday) 7:00- 7:30 in the morning at Net 25. The 30 minute news format will be in Mandarin Chinese in the country’s current events while in International news will be a combination of Mandarin, English and Filipino.

Executive Producer Lolita S. Ching together with her daughter Louella Ching as Producer of both Chinatown TV and CNTV.

Chinese language news are not new to Philippine Broadcasting, they had been there even in the 70’s and early 80’s, some attribute it to the convergence of culture because since the time of the European colonial powers Chinese culture are part of the mainstream Filipino Society.( MJ Olvina- Balaguer, 09053611058, maryjaneolvina@gmail.com)