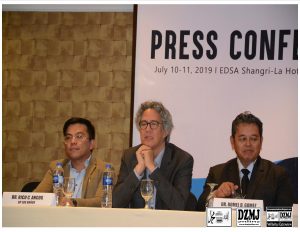 Mandaluyong City, Philippines- IMPROVING our knowledge in computing and the internet is the advice given by Dr. Romel D. Gomez, the newest Corresponding Member of the National Academy of Science and Technology in the 2019 41st Annual Scientific Meeting held at Shangri la EDSA Hotel in this city July 10 and 11, 2019.
Asking about the positive effects on labor in a press conference he says that indeed “disruptive technologies” such as AI’s or Artificial Intelligence can and will displace labor.
He narrated things about the shift from manual labor to the introduction of mechanization in the industrial revolution he says that it has displaced a lot of workers who has no knowledge or has little knowledge on the technologies.
Forecasters predict that in the advent of the AI in the Business Process Outsourcing or BPO in the next 5 to 10 years it will be a dying industry, mainly because of the innovation in voice and data that mimic real human conversational patterns and characteristics.
But he said that “Since we cannot change the wind we might as well just change our sail” he meant that if indeed we lost a large amount of labor force due to the “internet of things” like AI lets concentrate on the jobs that the computer cannot do.
Lastly he advise to the government that they should concentrate on teaching computer literacy to elementary and high school students, in the K to 12, they should encourage choosing the STEM or Science Technology Engineering and Mathematics so in the future the country will be competitive to face the FIRe (Forth Industrial Revolution) particularly the AI./// with MJ Balaguer, +639053611058, maryjaneolvina@gmail.com and Photos from Michael Balaguer, +639333816694, michaelbalaguer@yahoo.co.uk