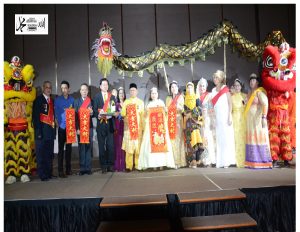 Kota Kinabalu Sabah, Malaysia- SUCCESS is measured by the compliments received even after an event or important endeavor has taken place. It is synonymous with the recent GLOBAL BUSINESS CONSORTIUM held in this city wherein top businesspersons from around the region converged at the historic HILTON Hotel.
The Likes of Dr. Zenaida Laidan, Regional Director of the Science Department in the Philippines, Philippine Politician Lady Ann Indanan Sahidullah, Founder of the Jade Museum in Kuala Lumpur Malaysia Ms. Catherine Chan and World Renown Architect Sandra Costa of the Sandra Costa Designs from the USA just to name a few.
The GBC has been held at this city was in its 2nd leg having the first summit held at General Santos City Philippines and was well attended by the people of Mindanao Sulu and Palawan. In this activity, the main stakeholders were the Royal families and Business people while at the fist were farmers and fisher folk or what others may call the grass root level.
Halal is an integral part of the GBC especially now that it has landed in Malaysia, a nation so stict in terms of Halal for it is included in their constitution. Part of the speech of the Guest Speaker Dr. Zenaida Laidan says that the Prospect of Halal in Malaysia, Philippines and indonesia (MaPHILIndo) is high which meant that Hala lifestyle, food, pharmaceuticals, medicine, industry, science and technology will have a very promising future.
His Majesty Raja Al Sultan Ghamar Bin Abdul Ghapar Jamalul Kiram III and Her Majesty Queen Ma. Helen Ju Xi Mulan Bin Baginda Ali Abdurajak Elizabeth III both anticipate the next event which will tentatively be in Indonesia to complete the MaPhilIndo because GBC events already took place in the Philippines and Malaysia.
The realization of the principles and business plans both by the Royal Couple, the Royal appointeees and chairmanships are geared toward business establishment, poverty alleviation, energy generation and an uplifted society under the LUPAH SUG Empire (Mindanao, Sulu, Palawan, Sabah, Sarawak, Kalimantan, Bulungan which the majority of the population is not on the middle class.
//Abdul Malik Bin Ismail, +639333816694, abdulmalikbinismail6875@gmail.com/// The Desk of the Minister of Information, The Ministry of Information and Communication, The Royal Imperial LUPAH SUG Islamic United Kingdom of Sulu band North Borneo.