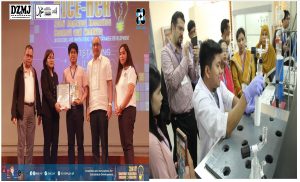 Dr. Jordan Madrid (middle), head of the PNRI Chemistry Research Section, receives the certificate of recognition for the Outstanding Utility Model Award entitled “Composite Nonwoven Fabric Heavy Metal Adsorbent and Method for Preparing the Same” during the 2019 Regional Invention Contest and Exhibits (RICE). They are joined by DOST NCR Director Jose Patalinjug III (2nd from right) and other officials. Photo by DOST-NCR

During a training course hosted by the Philippines under the International Atomic Energy Agency, representatives from various countries in the Asia-Pacific region observe as a researcher demonstrates radiation grafting procedures at the PNRI Chemistry Research Section.

Leading chemists from the Department of Science and Technology – Philippine Nuclear Research Institute (DOST-PNRI) are recently using native products such as abaca to make fabrics that can deal with pollution by filtering toxic materials and other contaminants.

The composite nonwoven fabric was developed from natural fibers such as abaca and are paired with synthetic polymers that can filter heavy metals dissolved in liquid. Metals such as lead, cadmium, nickel, chromium, mercury and arsenic are hazardous to health as well as the environment.

Abaca continues to be useful and readily available as the Philippines remains its world’s largest producer, accounting for around 85% of the global production. The native material’s natural strength also makes it perfect for withstanding the grafting procedure, allowing it to serve as a base material.

The materials are grafted using radiation at PNRI’s Electron Beam Irradiation Facility, after which it is further processed into its final form as a synthesized filter for heavy metals. Radiation can be used to modify materials and graft various polymers that can have advanced properties such as filtering various contaminants from water.

Studies by the PNRI Chemistry Research Section showed that the nonwoven fabric is reusable and cheaper to use than commercial resins which have the same purpose, while also being on par, if not better, in filtering the waste.

PNRI was granted a utility model for the technology in 2019 and continues to develop radiation grafting for other applications.

More recently, the invention was declared as the Regional Winner for the Outstanding Utility Model Award during the 2019 DOST Regional Invention Contests and Exhibits (RICE) in the National Capital Regionheld on November 6 to 8, 2019.

Radiation grafted materials are expected to prove useful for various industries, particularly those requiring waste water treatment. The International Atomic Energy Agency (IAEA) has also engaged in a project with the Philippines and other countries for the increasing use of these technologies to minimize hazardous pollutants in various bodies of water in the Asia-Pacific region.

PNRI researchers are looking forward to the development of other applications of radiation grafting such as producing biodiesel and recovering precious metals.