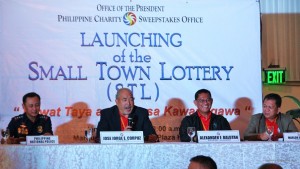 MANILA, The PHILIPPINES- In a bid to quell the rampant proliferation of illegal number games in the country the Philippine Charity Sweepstakes Office (PCSO), the governments premier lottery organizer suggested a benevolent solution to the problem by legalizing the illegal through the Small town Lottery (STL).

Last January 31 of this year, the PCSO announced the 56 new authorized agent corporations, these groups are chosen from the 224 applicants and all has passed the investigations conducted by the office to determine their capacity to operate the lottery.

Although the 56 winning AAC is divided into the 38 new applicants that has passed the investigation and the 18 existing illegal number game operators that has gone legal and absorbed into the Expanded Small Town Lottery.

According to the Philippine Charity Sweepstake Office Chairman Jose Jorge Corpuz the aim of the expanded STL is to encourage the illegal operators to go legal and the proceeds of the taxes that will be collected will then go to the charity projects of PCSO such as medical assistance and others medical related problems of the poor.

Though the community based illegal gambling operations has been “leveled-up” because they become legal, other players in the grassroots complained that the composition of the 38 “new” players or AAC are mere “dummies” of the old gambling lards which some belongs to the 18 existing players.

The small gambling lords as interviews by www.diaryongtagalog.net says that there aren’t any changes in the operations but deception in the part of the people making the illegal pose as legal.///Michael N. Balaguer 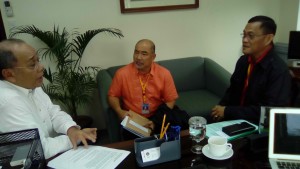 “The operation of Meridien outside Cagayan is not sanctioned by PCSO. The government is deeply invested in the success of STL to generate funds for priority health programs. The PNP and the Armed Forces of the Philippines (AFP) have been tasked by the President to help protect PCSO’s STL,” Corpuz clarified.

Meridien has been associated with gambling operator, Filipino-Chinese Charlie “Atong” Ang. Meridien got a permit to operate the numbers game from the Cagayan Exclusive Economic Zone Authority (CEZA) based in Sta. Ana, Cagayan, to operate jai alai fronton that mutated also into a “virtual two” lottery game.

Corpuz’s reaction stemmed from a news report citing the spokesperson of the Albay Provincial Police Office, who said that Meridien had secured a permit from the Sangguniang Panlalawigan to operate the numbers game since 2008 despite the fact that the PCSO had an approved Authorized Agent Corporations (AACs) now playing the STL in the province.

PCSO General Manager Alexander Balutan said he sought the assistance of PNP to conduct a crackdown on illegal gambling activities.

He said Meridien’s numbers game operation is not authorized under the 2016 Revised Implementing Rules and Regulations (IRR) for STL.

Just recently, the PCSO has launched the expanded STL operations composed of 56 AACs.The government is aiming to generate revenue in the amount of 27 billion for charity this year. President Rodrigo Duterte has promised to buy free medicines for the poor, improve medical services, strengthen health programs, and expand institutional partnerships, among others.

Balutan also reminded the public that there are only two institutions authorized by the law to operate gaming or play lotteries: PCSO and Philippine Amusement and Gaming Corporation (PAGCOR).

“We have to support our 56 AACs in their entry in the market, ”Balutan urged the government officials and the public.

Records show that Albay and Camarines were among the 56 municipalities that were given permits and accreditation by the PCSO to operate STL.

In 2011, Meridien was able to secure a Temporary Restraining Order (TRO) from the Court of Appeals (CA), which allows it to operate within CEZA and reportedly, 12 to 14 other provinces as well, including Pangasinan, Cavite, Rizal, and Oriental Mindoro.

Last year, the House Committee on Games and Amusement started a probe into the illegal operation of Meridien.

THE Philippine Charity Sweepstakes Office (PCSO) on Friday said the 56 players of Small Town Lottery (STL) are expected to give more than .5 million job employment this year.

This is the reason why PCSO is doing their best to seriously implement the government’s campaign against illegal gambling.

PCSO General Manager Alexander Balutan said that aside from the projected revenue from STL, legal employment of more than .5 million people is another benefit of the the operation of 56 Accredited Agent Corporations (AACs) that were given permits to operate STL nationwide.

He explained that all illegal gambling operations are called on to go legal. This includes kubradors and kabos who will be affected by the government’s campaign to fight illegal gambling activities. But if they work under the STL, they should not worry because they will be given a legal source of income as the sales force of the STL operators in their province.

For his part, PCSO Chairman Jose Corpuz explained that the launching of 56 AACs is expected to provide alternative livelihood to over 500,000 people.

Corpuz said that the existing kubradors or bet collectors will be the same people that will be employed by the AACs.

Illegal gambling activities operate through an “underground economy” where kubradors and kabos (bet collectors) are hired under the wing and protection of the illegal gambling operator.

Corporations operating under the expanded STL are no different, with its team of sales representatives (kubradors) and sales supervisors (kabos), but without the fear of trying to hide and evade the law.

PCSO records show that as of 2016, there are currently over 64,000 sales representatives, more than 100,000 sales supervisors and nearly 8,000 organic employees. All gainfully employed, who can avail of benefits from social services and PhilHealth. Benefits and security that illegal gambling operators can never assure nor provide.

As an alternative source of livelihood, Balutan adds that an STL sales supervisor (kabo) can earn an average of P7, 000 a month. A significant amount that translates to an increase in the purchasing power of around 500,000 new kabos, or 40B a year to contribute in helping stir the economy. For their families however, this means food on the table, and additional income to augment their daily needs.

Under the directive of President Rodrigo Roa Duterte to generate more funds for charity services, the PCSO responded through the expanded STL, with its revised Implementing Rules and Regulations, and a Memorandum of Agreement (MOA) with the Philippine National Police (PNP) to come up with a crackdown against illegal gambling.

Under the MOA, arrest and filing of charges will be made to those who are engaged in illegal gambling operations.

As of press time, arrests of illegal gamblers and collectors have already started in several provinces in the country particularly in Batangas and Laguna.