The P90 million AgriMuseum project of ASEAN is aimed to rise in 2019 to inspire and educate about agriculture especially the youth and other stakeholders like policy- makers, researchers etc. and to be a solution on food security threats. It will be located beside SEARCA headquarters at University of the Philippines-Los Banos, Laguna.

Meanwhile,  It has received 5 million pesos grant from the Bureau of Agricultural Research (BAR) Department of Agriculture.

“SEARCA is actively inviting partners in the project, including the public and private sector, particularly food or agri-related companies that could contribute to it as part of their corporate social responsibility efforts,” says Dr. Gil C. Saguiguit Jr, Searca Director.

SEARCA is one of the oldest core of SEAMEO. The SEAMEO Council is the highest policymaking body of SEAMEO, an inter governmental treaty organization founded in 1965 to build up cooperation among Southeast Asian nations in the fields of Education, Science, and Culture. Education Secretary Leonor Briones represented the Philippines in the council, which is composed of the Education Ministers of the SEAMEO member countries.

SEARCA will be presenting the proposal  AgriMuseum and Learning Center at the Biennial Meeting of Education Ministers of 11 Countries in Jakarta, Indonesia this week.

It is also included in the agenda of this high-level meeting on the recommended of Thai Education Minister Teerakiat Jareonsettasin who is concurrently President of the Southeast Asian Ministers of Education Organization (SEAMEO) Council.

The AgriMuseum will occurs broaden understanding on Southeast Asia’s challenges in  terms of food supplies and generate regain interest in agriculture as field of studies, specializations, and source of livelihood.  Detail from Melody Aguiba of Growth Publishing ( Mj Olvina- Balaguer, 09053611058, maryjaneolvina@gmail.com) 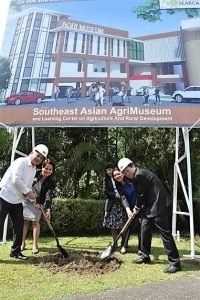 “ Income wise, a devoted farmer may earn a net income in the millions given his determination to pursue hybrid rice farming, “ Danilo Bolos attested.

Having grown up in, Tondo, Manila,   Bolos, 58, have no ideas of farming as a child.

“I felt that farming isn’t something that should just be taken as a hobby.  But it should be studied very seriously and must be considered as a full-time job,” said Bolos.

As licensed Electric Engineer by profession worked as OFW overseas Filipino worker) in Saudi Arabia and Japan for about two (2) decade. Turn to become an entrepreneur and upgrade farming from 3 hectares now expand to 36 hectares of hybrid rice farm.

Married with Glenda Jacinto from Cabanatuan City,Nueva Ecija then just one day  decided to venture into rice farming.

As years goes by, he just contented growing registered inbred seeds to the high yield type of rice prior in the year 2000, which there was no hybrid rice yet in the market place. Being high yielding, the seeds output from 150 to 180 cavans per hectare.

He bought seeds from Philippine Rice Research Institute(PhilRice) and used it as first on his original three hectares.

He was contented at his earning until one day he got introduced to a Department of Agriculture (DA) program for hybrid rice seeds. That convert his contentment into challenge.

To upgrade himself in farming an extra effort of attended many seminars, trainings, foras, workshops given by the government such as; DA technicians and municipal agriculturists  that enabled him to become an expert at hybrid rice farming.

“When it was just being introduced, many criticized SL-8. They said it was disease-prone, and the rice spoils fast, he said. Eventually, hybrid seeds even sold lower in the marketplace of Php 1.00 per kilo compared to other seeds.”

Despite the criticisms, he found a huge advantage of hybrids that yield 200 cavans per hectare.

When the opportunity opened him a chance to take another three hectares of land as mortgage for a loan amount, he never think twice but instead devoted the entire mortgaged land to hybrid SL-8H.

Today he enjoys the ripe of his risk taking  in growing SL-8H, He advocate to reach other farmers who have not yet know about the benefit of hybrid seeds.

Such assistance is the endorsement of a person as a genuine farmer-member of the STAR Kapalay.  Through this membership, farmers have the favor of borrowing money from the DA Land Bank of the Philippines loan program called “Sikat Saka.”  The program lends Php 40,000 hectare for inbred and Php 50,000 hectare for hybrid usually up to Php 150,000 per season.

In the last rainy season, as model farmer he  tried on his field SL-12H as a demonstration of a transplanted hybrid. That gave him a great yield at 254 cavans.

He has mechanized his farm tractor and  harvester. As a farmer-leader, he got a gift from DA  a transplanter produce by Philippine Center for Post harvest Development and Mechanization ( PhilMech).

As Chairman of  IAs Federation, his financial compensation pro bono comes in the form of  perks  for occasional fertilizer grant from the government when calamities happened.

He doesn’t care even  he doesn’t get paid in leading the IAs.  But perhaps his service to the people is a win-win for him having always been advantage to be the first to benefit from government programs when calamities arise since he’s always first in the list of authentic farmers.

At home, Bolos is proud father being a hybrid rice farmer as source of livelihood. Which able him to be a good provided and give a quality education to his children.

CAPTION Bolos and his son.

The country will be reviving seemingly demised garlic industry as the Institute of Plant Breeding (IPB) occurs with “mass micro propagation” and “tissue culture” of virus-free garlic planting materials that can boost garlic production.

“MMSU and UPLB have place capacity to produce the required basic virus-free clones.  It is a matter of providing the universities the necessary operating funds to sustain operations,” he said in “What to Do with Garlic.”

“The state universities can eventually farm out the commercial operation of tissue culture production to private seed companies or cooperatives.  Aligned with  Bureau of Plant industry Director Vivencio Mamaril pushes for implementation of a garlic development plan” added by Javier former President of National Academy of Science and Technology.

Tissue culture is a process of producing numerous disease-free planting materials in the laboratory for mass production in the fields.  Different plant parts are extracted from parent plants and grown under aseptic and controlled environment.

“The actual commercial propagation of certified virus-free seeds will not be performed by the universities but by designated properly trained farmer seed cooperators/farmer scientists supervised by BPI and Agricultural Training Institute (ATI),” according to Javier former Secretary of Department of Science and Technology.

The vital role of this technology will have a significant impact in increasing income of small farmers.  At a market price of P80 per kilo minus cost of P40 per kilo, margin is at P40 per kilo or a net income of P160,000 per hectare at a potential yield of 4 metric tons (MT) per hectare.

Compare to the three times most rice farmers’ income of only P50,000 per hectare.

Imports reached 74,000 MT as of 2015 ( data from Philippine Statistics Authority or PSA) representing more than 90 percent of total supply. Import was valued at $25.43 million.

However, with IPB’s technology on virus-free planting materials and its coordination with LGUs and DA, the country has already reached a certain level of success in raising production.

Ilocos Region produced in the first quarter 5,100 MT of garlic, contributing 72.5% to the national total.

MIMAROPA (Mindoro, Marinduque, Romblon, Palawan), specifically Occidental Mindoro, had the next highest garlic production with 21.3%  of total in the first quarter followed by Cagayan Valley, 4.3%.

“With virus-free planting materials and intensive cultural management, average yields of 5.0 tons per hectare are attainable. These should bring down costs competitive with the ₱20 per kilogram landed cost of imported garlic.”

All resources in garlic planting should be poured into ideal provinces. These are  Ilocos Norte, Ilocos Sur, Batanes, Nueva Viscaya, Nueva Ecija, Batangas and Occidental Mindoro where “farmers have experience and who need no further persuasion to grow garlic,” says Javier, also Coalition for agriculture modernization in the philippines (CAMP) Chairman.

Patena said a farmer-cooperator of IPB was also able to achieve high yield in garlic without use of fertilizers.

Felix Valenzuela, in his 1,000-square meter farm in Cabuyao, Laguna hit a harvest of 1,600 kilos. This is effectively equivalent to 16 MT per hectare.

Given stability on this yield from a garlic variety called “Batangas Brown” as assisted by IPB scientists, this could earn for farmers P120,000 per season. 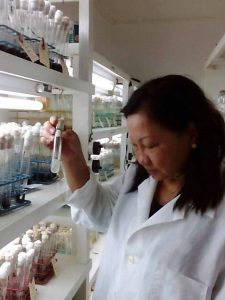 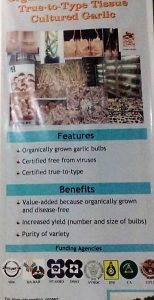