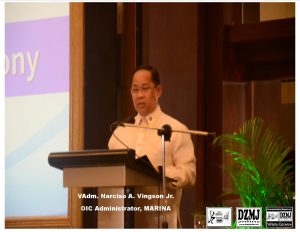 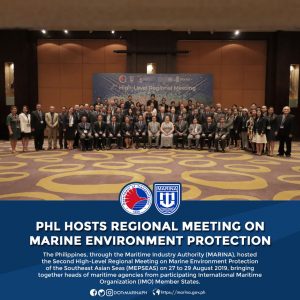 Gracing the opening ceremony, Assistant Secretary of the Department of Transportation (DOTr) for Maritime Lino H. Dabi expressed the Philippines’ collective gratitude for the honor of being the host country of said meeting.

“As one of the beneficiary countries of this project, hosting this event not only allows us to demonstrate our full commitment in and support for this project, but also provides us the opportunity to reciprocate the initiative and efforts of the IMO and the Norwegian Agency for Development Cooperation (NORAD),” Asec. Dabi said.

As the chair of said meeting, MARINA OIC – Administrator Vice Admiral Narciso A Vingson Jr reiterated the country’s commitment to participate and comply with its obligations to the MEPSEAS Project.

“Through the Philippine maritime administration, we shall remain steadfast in our efforts in ensuring the full and effective implementation of our priority maritime environment conventions,” VADM Vingson said.

The IMO Project Coordination Unit and international consultants led the session by providing updates regarding the MEPSEAS Project website, initial steps undertaken to capacitate countries in implementing the provisions and requirement of the Conventions, results of the Train the Trainers (TTT) held in Singapore on 28 to 30 May 2019, and initial delivery of the training modules covering the Ballast Water Management (BWM) Convention, Anti-Fouling System (AFS) Convention, and MARPOL Annex V.

The MEPSEAS Project is a four-year project (2018-2021) of the IMO, in cooperation with the NORAD, providing assistance to Southeast Asian countries in ratifying and implementing IMO Instruments for the protection of the marine environment. It aims to reduce the risks and impacts of environmental issues related to maritime transport in the ASEAN region. It supports the Sustainable Development Goal (SDG) 14 which is to “conserve and sustainably use the oceans, seas and marine resources for sustainable development”.

The Cebu Bus Rapid Transit (Cebu BRT) is now on its final design and implementation stages, and is right on track for phase 1 implementation on December 2021.

The Cebu BRT, which forms part of the Cebu Integrated and Intermodal Transport System (CIITS), aims to promote enhanced mobility and connectivity for Cebuanos traversing through various modes of public transportation such as road-based land transport, railway, and other transport infrastructure projects in the pipeline.

To assess the technical feasibility and soundness of the design plan of the Cebu BRT, the DOTr engaged the service of a Technical Support Consultant (TSC), Egis International, a move supported by the World Bank (WB) and the Agence Française Développement (AFD).

The TSC crafted the Metro Cebu Integrated Intermodal Transport Plan (MCIITP), which identified corridors where mass transit systems should be developed. In serving its purpose to guide the alignment of future mass transit developments, the MCIITP aims to provide a seamless and integrated mass public transport system not just in Cebu City but also in adjacent cities.

With the aid of the TSC, the the DOTr has meticulously refined the Cebu BRT design plan to ensure that the project, along with others under the CIITS, will comprehensively improve the traffic situation in Metro Cebu, help spur regional growth even in adjacent cities and towns, and bring comfort and convenience to the commuters of the sprawling metropolis in Central Philippines.

According to DOTr Undersecretary for Road Transport Mark De Leon, the design plan for the Cebu BRT is an improved version of the initial project design approved by the National Economic and Development Authority (NEDA) in 2014, and that the improvements made are still within the said approved conceptual plan, and with foremost consideration for the improved mobility and connectivity of the people of Cebu.

“No changes were made on the alignment of the Cebu BRT. It was, in no way, shortened. In fact, to this day, the plan calls for a route of 23 kilometers. Simply put, design considerations are not confined to present demands, but factors in future infrastructure development, expansions and extensions,” Usec. De Leon said.

“What was perceived as route reduction was the division of the project into three phases under the new design plan. The rationale for this segmentation is in line with the policy of partial operability instituted by Secretary Arthur P. Tugade, which aims to carry out infrastructure projects in phases to allow for faster implementation and, therefore, immediately bring a considerable degree of operable service and benefit to the public without them having to wait for the full completion of the project which, in the case of the Cebu BRT, extends beyond the Duterte administration,” De Leon added.

By December 2021, the Cebu BRT Phase 1 will have been established along dedicated busways from Cebu South Bus Terminal to Capitol via Osmeña Boulevard. Phases 2 and 3 will extend the dedicated BRT lanes to Bulacao and SRP in the south, and Talamban in the north.

The three-year allowance before the implementation of Phases 2 and 3 while Phase 1 is under construction is to obtain enough time to acquire the necessary Right of Way.

Phase 1 of the Cebu BRT will become operational before the end of 2021, while phases 2 and 3 of the entire alignment, as indicated both in the original and in the new project designs, is targeted to be fully operational by 2025.