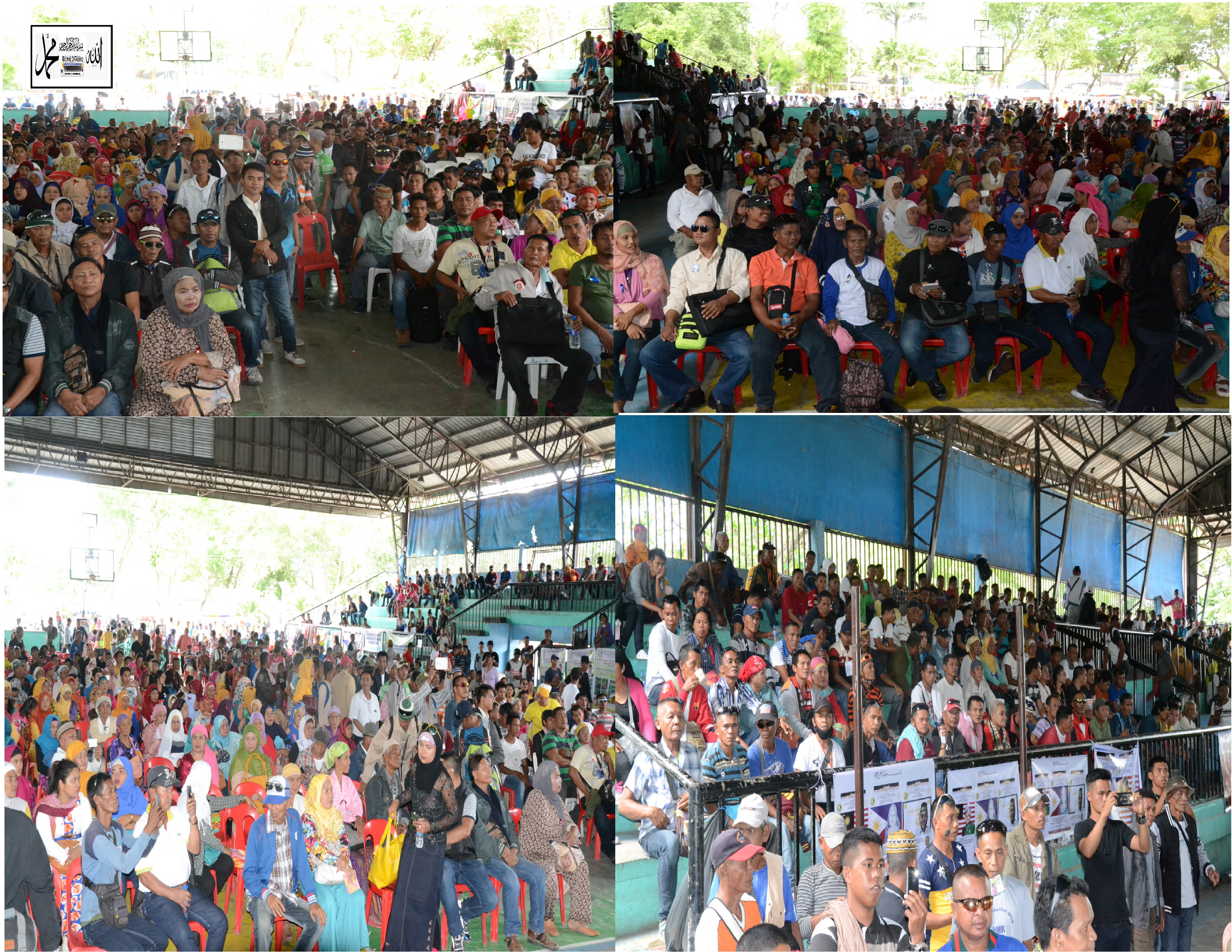 “The Show must go on”, a tagline from the entertainment industry which meant that amid hurdles and anything that blocks is negligible. Also is true to the minds of Queen Maria Makiling Helen Fatima Nasaria Panolino Abdurajak Ju Xi Mulan and Raja Mohammad Ghamar Mamay Hasan Abdurajak of the Imperial Federation of Farmers and Fishermen of Mindanao and Palawan Inc. part of the Royal Imperial Lupah Sug Islamic United Kingdom of Sulu and North Borneo along with its co equally important guests and their representatives.

Started 1:00 in the afternoon of January 27 2019 at the Gen San Gym which at the first half of the program is in total darkness, people attended especially coming from far flung areas of Mindanao and Palawan says that it’s a sabotage and underestimating the capability of the IFFFMPI and RILSIUKSNB to organize a large group.

But then the inevitable came and truck loads of farmers fishermen etc went their way and didn’t bother if there are lights or not, the microphone doesn’t work because there is no electricity yet Raja Mohammad Ghamar Mamay Hasan Abdurajak still boost the morale of the people.

Politicians such as Shirlyn Baῆas Nograles and Ryan Chua Rivera didn’t show up because they under estimate the fact that the RILSIUKSNB and its IFFFMPI will be unable to that large group of people especially on a Sunday.

They didn’t even bother to send a representative if they indeed believe that the group has a clout anyway, amid the “local” oligarchs be-little the organizing capacity of both the IFFFMPI and RILSIUKSNB, big wigs of the “academe’ and governance went their way to either send a representative or attend personally.

Many thanks to Dr. Hadja Shayma Zenaida P. Hadji Raof Laidan of the Department of Science and Technology Region 12, the representative of General Danilo Lim of the Rebolusyunaryong Alyansang Makabansa Partylist or RAM, Chinese representatives, Irish and Americans and with it as precedent, the RILSIUKSNB as well as the IFFFMPI will seldom entertain politician or political aspirant to that effect for it will just jeopardize the organizations noble intention that is the holistic welfare of the people and poverty alleviation through entrepreneurship.///abdul malik bin ismail, 09333816694

A STATEMENT ON THE BANGSAMORO ORGANIC LAW (BOL) AND SOCIAL PEACE

We at the National Research Council of the Philippines (NRCP) are one with
the nation in the pursuit of peace and prosperity in the Museum region of
Mindanao, forged through the passage of the Bangsamoro Organic Law (BOL).
We also recognize that the path to the realization of the BOL is complex
and filled with challenges.

We commend the Bangsamoro Organic Law for the addressing the root sources
of social violence in the Southern Philippines. Indeed, the meaning of
peace goes deeper than the cessation of militarized encounters. Studies on
Mindanao such as those by Montiel (2012; 2013), Bulatao (1973), and Saber
(1969) imply that among Muslims peace is strongly associated with Muslim
culture and land-related debates. The BOL forefronts both of these issues.

However, we are that the BOL’s passage is only the beginning, though a very
important one of a much journey ahead for our country. We note that
political transitions anywhere, in any form carry with them challenges such
as reversal of powers to long established dominant groups, or the slow pace
of policy execution, or the lack of support from citizens. Cognizant of
these challenges, those trusts in the pursuit of the BOL see the need to
utilize appropriate communal resources during during the difficult
transition period.

The Bangsoro Organic Law engenders a form of decentralization through
power-sharing between national and sub-national levels of government.
However, power-sharing is not easy to implement. Decentralization presents
both opportunities and risks. On the hand, autonomous regions can turn more
culturally creative, economically productive, and politically accountable
communities precisely because they are no longer stifled by centralizing
domination. On the other hand, such centrifugal forces may likewise unleash
destructive fragmentation that may create new social divisions and
separations or may perpetrate the domination of traditional powers and
authorities. Indeed, the cooperation and partnership among diverse groups
such as the Moro Islamic Liberation Front (MNLF), Indigenous peoples,
Christians, and the Philippine government, who have been instrumental in
the forging of the BOL, are essential to the BOL’s intent and purposes.

Finally, we at NRCP recommend a number of measures that are necessary for a
healing process and to build a society of peace and development. We
recommend among others the following measures:

1. Address the memories and traumas;
2. Encourage greater tolerance and intercultural living among clans and
communities that respect and recognize diverse beliefs, customs, and
practices;
3. Capacitate communities around participatory and shared efforts in local
governance;
4. Enhance the capacities and skills of local authorities, particularly in
leadership under the new Bangsamoro Organic law;
5. Encourage and incentivize experts and scientists to share the competency
necessary for a local democracy to be inclusive and developmental.

The Department of Science and Technology Region V (DOST V) in collaboration
with the Technology Application and Promotion Institute (DOST-TAPI) and
higher education institutions (HEIs) relaunched the “DOST-Academe
Technology Based Enterprise Development (DATBED) ” was apt for the Regional
Relaunching conducted on 13-14 December 2018 at Camarines Sur Polythenic
Colleges (CSPC), Nabua, Camarines Sur. DATBED, as one of the key programs
of DOST-TAPI through the regional activity re-introduced and promoted the
DATBED Program to state universities and colleges (SUCs), private HEIs,
national government agencies (NGAs) and non-government organizations (NGOs)
in the region.

Mr. Javate expressed his hopes that DATBED program can students with the
necessary skills to enhance their potentials as a starting point in their
career and be the country’s future scientists, researchers and innovators.

Two DATBED beneficiaries in the Province of Camarines Sur attested to the
program’s invaluable assistance and inspired future student – techo
preneurs. Mesdames Marian Gabrielle J. Bordado and Rachelle A. Esguerra,
owners of Choconaga Enterprise and Sweetven Enterprise, respectively,
presented how DATBED became instrumental in the eventual success of their
respective innovative undertaking starting at school level (a thesis as a
course requirement) ultimately registered/expanded into business
enterprises. Also shared to the participants are hardships encountered by
an entrepreneur; though, all pursuits always have setbacks, they encouraged
the future techo-preneurs to never be discouraged by failures and
limitations, and turn them instead into challenges and opportunities for
something greater and rewarding.

Dr. Colorado’s talk on Techno-preneurship insights opened the afternoon
session. He shared his experience during an official trip to Isarel for the
R&D works examples of Weizmann Institute of Science and the Ministry of
Science and Technology as examples of how to conduct basic researches. One
of the R&D undertakings that can be possibly adopted in the Philippines is
seaweed culture since our local waters have very high potential and be
tapped for various R&D initiatives. We should also go beyond traditional
enterprises (backyard piggeries, poultry , etc.) and “think outside the
box” for more unique and innovations such as iron bone (counter attack
missiles), smartroads, and gene mapping illustrate the extent of technology
application. Futher, as an encouragement, Dr. Colorado said, “Let us make
greater researchers, especially in health and other fields and sectors that
we need to develop. Afterall, technology will never depreciate. Let us
accomplish something in entrepreneurship.

Dr. Manuel C. Mendoza, Supervising Education Program Specialist, CHED V,
presented the Streamlining of Techno-preneurship in the Academic Curriculum
for college students, emphasizing on our predominantly agricultural
country that is dependent on technology and entrepreneurship. For their
part, they have already begun streamlining the current academic curriculum
for entrepreneurial courses to create an outcome-based education program.
Dr. Mendoza recommended to DOST-TAPI the seventeen (17) HEIs in Bicol as
highly qualified potential DATBED partners.

For the DATBED accredited schools and students-beneficaires, as forum was
conducted on the second day, also highlighting the Technology Transfer Act
(RA 10055) and Intellectual Property (IP) Rights by Mr. Javate and Ms.
Dumali, respectively. DOST-TAPI assists research and development
institutions, HEIs and individuals on patent development, copyright and
licensing, among others. Dr. Atian, represented by Prof. Emilda E.
Escolano, Dean, College of Management and Entrepreneurship, CSPC, thanked
DOST V, DOST – TAPI and the HEIs for their active participation in this
relaunching, and cited CSPC’s invlovement in the DATBED program.

DATBED’s relaunching will eventually result to more partner-implementers in
the academe and the private organizations for the establishment of
technology based enterprises in the region. (Dr P.O. Lucena/Ms. L.D.B
Bellen/Mr. M.F.L. Miranda, DOST V).