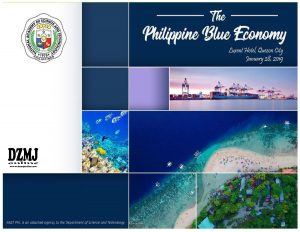 BLUE is a color by which most of the time can be associated with royalty, affluence and pristine. The color being talked about is the environment this nation is surrounded by, the Sea.
Contrary to popular belief especially in the cities, more people built their lives in water, made their enterprises in its tributaries and established an entire society along the banks.
We have more or less seven thousand one hundred islands and fisher folk thrive along the banks as both fishing community and tourism, for beach goers it also can be a sporting destination.
Small and large shipbuilders are creating their marine masterpieces bearing the flag in dangerous waters of the ocean but still victorious and come back home again for their families.
The exchange of goods from one island to the other has its positive and negative effect to the government but more favorable to the island consumers who was fortunate enough to experience a piece of the other island’s prosperity through trade.
For years we have been using the seas to sustain our society through raw materials and its byproduct. Benefits we got from the oceans are Jewelries, food cosmetics, medicine, transportation, tourism just to name a few.
With this, the government through the National Academy of Science and Technology in its Agricultural Science Division organized a science policy and information forum with all stakeholders in the fisheries and marine sector.
Aimed to come up with realistic, sustainable and inclusive science based policies to help, upgrade and revitalized the sector making them at par with our neighbors in the ASEAN.
The Blue Economy is where our roots has originated, we’re a maritime based nation yet most of our fisher folk is poor, we’re shipbuilders but our navy only has dilapidated ships so surely the science community can do something about it. (Mary Jane “MJ” Balaguer, 09053611058, maryjaneolvina@gmail.com)

Around 700 young achievers in science and mathematics gathered at the Philippine International Convention Center in Pasay City on February 14, 2019, for the annual Youth Excellence in Science (YES) Award.

In her welcome remarks, DOST-SEI Director Josette Biyo thanked the awardees for reminding the world of the excellence and hard work of Filipinos. “We hope you can be our scholars and be with the people as you reach your dreams,” she added. DOST-SEI spearheads the country’s premier science scholarship program. Biyo also lauded parents, teachers, school officials, and national organizers of science and math competitions who wholeheartedly supported the students.

YES awardee Emmanuel Osbert Cajayon of Emilio Aguinaldo College-Cavite expressed gratitude to DOST and shared his experiences and reflections in his student’s response speech. The IMO bronze medalist reminded his fellow awardees to focus on their passion for their chosen field and not just on achievements.

The YES Award is now on its 11th year, with each year showing a steady increase in the total number of awardees. From recognizing 70 student-medalists on its first year, 2018’s total number is 1,469 (from 332 schools) – the highest number recorded in YES history and a huge 23 percent increase from the previous year’s 1,195.

During the ceremony, 730 students from 120 schools in the National Capital Region were given the Secretary’s Medal which signifies DOST’s high regard for excellence and competitiveness.

Dela Peña emphasized that the increasing trend is more than an upsurge in numbers. “What we are more interested in is the quality that we elicit among our students as well as the values we taught them during training, during the actual competitions, and after reaching the goal,” he added.

In an effort to keep scholars who are expected to graduate at the end of AY 2018-2019 in the loop of their scholarship obligation, the Science Education Institute – Department of Science and Technology will again gather hundreds of NCR-based DOST-SEI scholars for a whole-day exit conference.

Now on its second year of implementation, the 2019 Exit Conference for DOST-SEI NCR Scholars will be held on February 18, 2019 at the Philippine International Convention Center, Pasay City. It aims to re-orient the scholars on the terms and conditions of the Scholarship Agreement specifically on service obligation, and provide them with information about the DOST-SEI graduate scholarship programs and job-related concerns that can help them start their S&T careers.

Notable guest speakers from both government and private sectors, and successful graduate scholars will also be gracing the event to give talks on relevant topics. Similar conference is being held for scholars enrolled in colleges and universities in the regions.