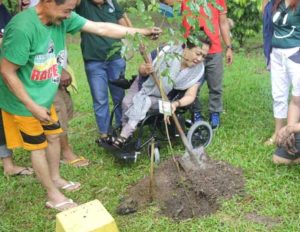 TREE PLANTING OF PERSONS WITH DISABILITIES

PERSONS with disabilities are contributing not only to the economic development of the nation but also in caring for the well being of the environment.

Quite recently, the National Commission on Disability Affairs in close coordination with the Department of Environment and Natural Resources engaged in a tree planting ceremony held at the Ninoy Aquino Parks and Wildlife, June 10, 2017.  Another aim of the activity is to help in mitigating greenhouse emission through massive repopulation of trees.

Organizations of differently abled individuals, professionals, students and government employees with their private counterparts converge hand and hand along with their picks and shovels to show that the disable is truly able to help in climate change adaptation. Present were, Ms. Julie Gorospo-Ibuan, Chief, SMCRD-DENR-SCIS, who did the welcoming of the participants along with messages from Dir. Carmen Zubiaga Executive Director, NCDA and Ma. Sabrina R. Cruz, Director, DENR-SCIS. Key personalities were able to plant trees such as:

Also participated in by the only blind broadcaster Mr. Rommel San Pascual AKA “Da Bulagkaster”. caption from the activity: National Council on Disability Affairs (NCDA) Executive Director Carmen Zubiaga (center) is joined by employees of the Department of Environment and Natural Resources (DENR) during a tree planting activity for persons with disabilities (PWD) held on Saturday, June 10, at the Ninoy Aquino Park and Wildlife Center in Quezon City.

The tree planting was held following the Freedom Walk staged by various PWD groups as part of the observance of the 119th Phlippine Independence and the 19th Philippine Environment Month  to raise public awareness of their human rights, including the right to clean air, clean water and quality environment. With photos from the DENR (MJ Olvina-Balaguer)

“Our differently abled children and fellowmen are capable of producing outputs that can be beneficial to our country’s economic development. With adequate technology, training, and opportunities, we can further empower them so they can do bigger things,” said DOST-NCR’s Regional Director Jose B. Patalinjug III.

The synergy of Department of Science and Technology – National Capital Region and DOST- Philippine Textile Research Institute(DOST-PTRI) collaboration to empower Persons With Disability in special education. The partnership provides livelihood opportunities for students to earn income through handloom weaving.

The project’s beneficiary, SFS-VSAP, was determine through in consultation with the National Council on Disability Affairs to boost the artistic potentials and augment the skills of Filipino children and adults with special needs.

Last month, DOST-NCR brought to St. Francis School-VSA Arts of the Philippines, Inc. (SFS-VSAP) the PTRI-developed portable therapeutic handlooms designed to deliver a weaving technology for those with special needs.

The partnership was ascertained of the DOST-NCR funded project titled “Improving the Capacity and Productivity of Urban Weaving of St. Francis School-VSA Arts of the Philippines, Inc. thru the Fabrication of PTRI model Portable Therapeutic Handlooms”. Under such project, DOST-NCR  allocate 10 units of the PTRI developed therapeutic handlooms to SFS-VSAP and allot trainings on the features, operations, and maintenance of the technology.

The therapeutic handlooms were specifically outline to engage differently abled persons in handloom weaving as a therapeutic rehabilitation for their physical, mental, social, and vocational ability. What makes the handlooms special is that these are strategically intend for the use of paraplegic persons or those with total non-coordination of their lower extremities.

The quality of a hand held lever which eliminates the use of treadle in alternate heddles warp (vertical thread group) to lock wefts (horizontal thread group). The therapeutic handlooms also promote simple weaving comprehension as it only needs eye-hand coordination for its users.

The SFS-VSAP has existing four handlooms which were imported from Japan and Thailand and were interchangeably used by 20 student-weavers during their classes. Prior to the DOST-NCR support,  Currently they has 47 students and among these are those with Down syndrome, global development delay, autism, and hearing impairment.

According to Rebecca Santos, VSA Executive Director, the imported handlooms are very expensive and costs roughly PHP 60,000.00 each. Hence, it difficult for them to buy additional pieces that can assist more pupils.

The products made by the students will showcase at DOST’s upcoming National Science and Technology Week exhibit in July 11- 15, 2017 at World Trade Center, Pasay City that truly inspired artwork from person with distinction and the people with determination from the group of special education student that full of creativity and amazing. ( MJ Olvina- Balaguer)

The Local Government Unit of Makati has paid a total amount of Philippine Peso (PHP) 7,090,613.05 to five cinema owners in the City for movie ticket pass for free to senior citizens and Persons with Disability (PWDs) of Makati who availed of the said privilege from January to March this year.

“The City Government is very grateful to our program partners for sharing our commitment to raising the quality of life of elderly and PWD Makatizens in every way possible. We thank you for your consistent support to this program which has given priceless joy to our beneficiaries for several years now,”  Abby Binay, Local Chief Executive says.

The project benefited some 77,685 senior citizens and 8,110 registered PWDs for  free cinemas admission.

The trailblazer of the concept of free movies in the Philippines originated in Makati that reap reward for the elderly started in 1997 with the passage of City Ordinance No. 97-085 appropriating P500,000 as the 25-percent share of the city in cinema admission costs for senior citizens.

The program was institutionalized almost three years later through City Ordinance No. 2001-035 granting the inclusion of appropriations in the annual City Executive Budget for its continuous implementation in succeeding years.

Just merely presenting neither senior citizen nor PWDs Identification card, together with their city-government issued movie tickets booklet, at the ticket booths whenever they go to any of the city cinemas.

This year, the LGUs has allocated PHP 35 million for the movie tickets of senior citizens and PHP 4 million for PWDs.

On the other hand, PWDs in the area are also granted the Access Display Card, a special car sticker for private vehicles they use that enabled them to being given priority for a parking space anywhere within Makati, as mandated by City Ordinance No. 2006-036.

They also have the PWDs transport ID card plus, which allowed them to fare discounts on the Metro Rail Transit (MRT), Light Rail Transit (LRT), provincial buses and local transport groups.

Free mobility aids such as wheelchairs, walker and crutches are also given to the less fortunate PWDs, while for the hearing- impaired and mute are being assisted by the city Public Employment Services Office through its Job Placement Program.

Aside from the free movies, senior and PWDs  also enjoy other  perks from the city. They receive a birthday, golden wedding anniversary cakes and bags of groceries every December. (MJ Olvina- Balaguer)