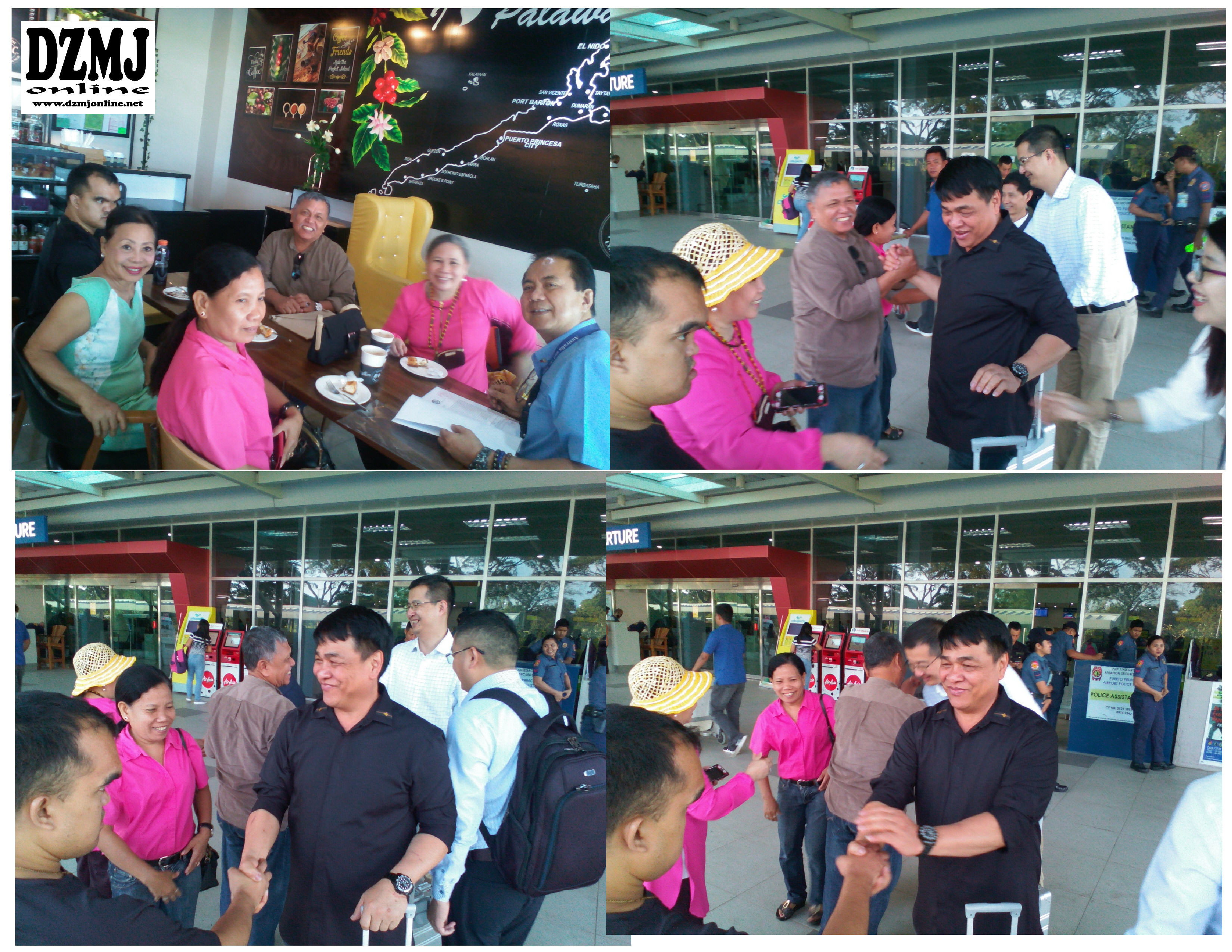 Chinese Investors from Longrich and the Government of the People’s Republic of China went back to China right after visiting the RILSIUKSNB in Puerto Princesa Palawan to take a look at site for investments bringing with them good news from the RILSIUKSNB.
The visitors, Cai Zuwei, Wang Yungang, Li Bin, Prince Lim, Kim Soon, Liu Lijun, Datu Wee Mun, Prince Xiong, you Kiong, Princess Maica Forio met with Palawan officials particularly Puerto Princesa City Mayor Lucilo Bayron.
The Chinese with some Malaysian also invited by the RILSIUKSNB are glad that the LGU and NGO in the country worked hand in hand in promoting the city and the Province of Palawan either for tourism or for investment purposes.
Her Majesties Queen Maria Makiling Helen Fatima Nasaria Panolino Abdurajak and Raja Mohammad Ghamar Mamay Hassan Abdurajak who had invite them to visit also were the one sending them off but the Chinese says that after Chinese New Year Celebrations in China they will be back to finalized the investment plans./// Maryam jannah balaguer 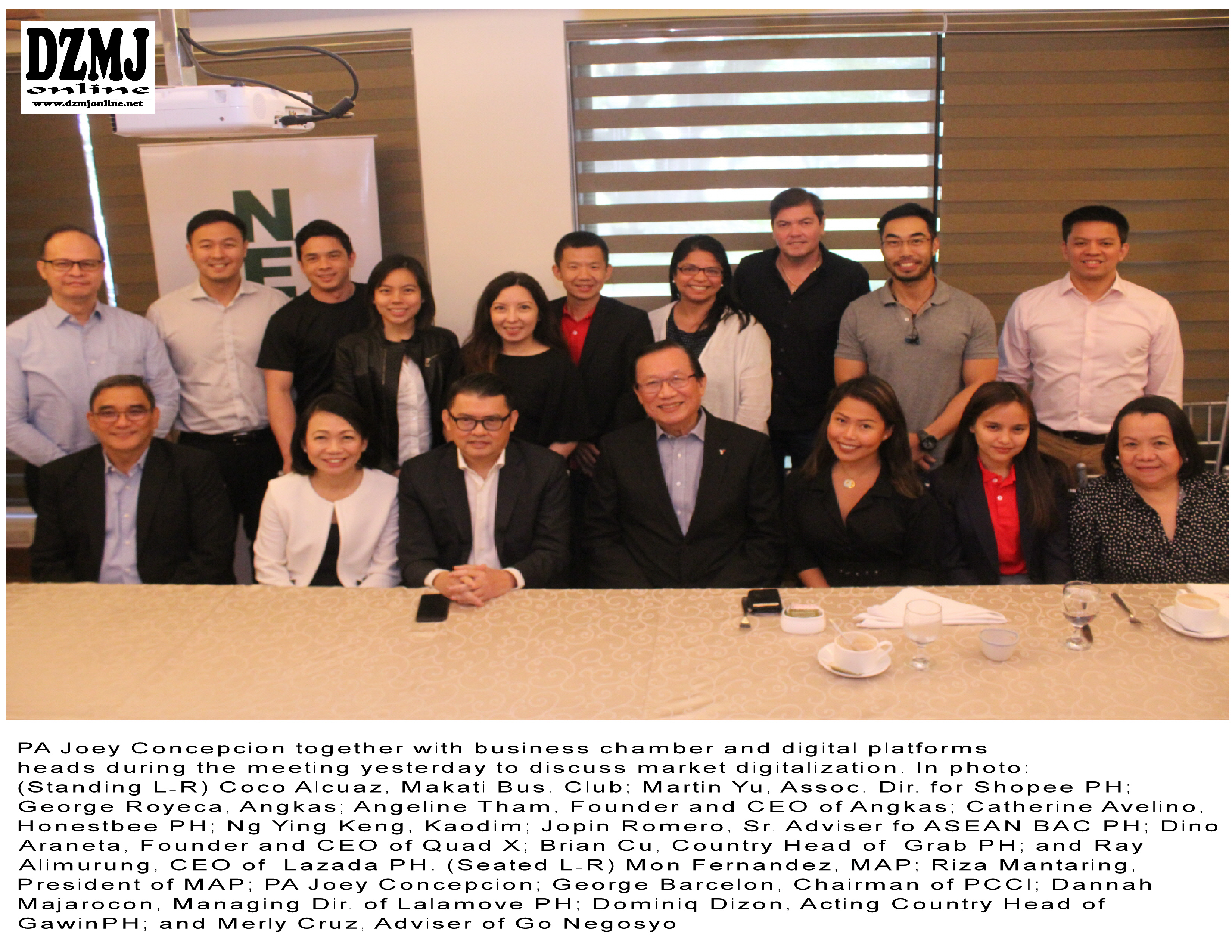 Presidential Adviser for Entrepreneurship and Go Negosyo Founder Joey Concepcion supports the digitalization of micro, small and medium enterprises through the help of digital platforms.

In a statement, PA Joey Concepcion said, “In support of the President’s goal of inclusive growth, we have to also be open for new digital platforms that would support the growth of our micro and small entrepreneurs. Digital transformation is the next revolution and will democratize the market, ensuring inclusivity and prosperity for all.”

Last January 9, 2019, Concepcion met with digital pioneers such as Grab, Lazada, Shopee, Angkas, Gawin, Lalamove, and Honestbee, to discuss their platforms’ services and the digitalization efforts for MSMEs. The meeting was also attended by business organization leaders of Philippine Chamber of Commerce and Industry; Makati Business Club; Management Association of the Philippines; and ASEAN Business Advisory Council PH and Go Negosyo.

The Office of Presidential Adviser for Entrepreneurship has been in talks with business organizations that are part of the Pilipinas Angat Lahat Alliance and digital market platforms. This is the start of a more concrete collaboration that would eventually lead to a bigger group of money and market digital players for the benefit of micro and small entrepreneurs.

During the discussion, one major concern was addressed, which was the need for a better framework and a governing body that could help regularize and monitor these platforms and their partner-members. Concepcion reiterated the need for further collaboration between government and these digital players, to ensure safety, security and proper regulation of their processes and services.

Poverty remains to be a problem in the country, but these platforms, according to Concepcion, are opening up opportunities, providing Filipinos access to different livelihoods through its different markets. Angkas, one such example, is not only providing motorcycle owners a means to earn as service providers, but is offering a real solution to the transportation problem. Unfortunately, a temporary restraining order has been issued, prohibiting Angkas from operating. “I think greater dialogue is needed between the government and these digital players – to clarify concerns, bridge misunderstanding, and to help in policy-making. These types of businesses, which provide real solutions and help Filipinos become small-time entrepreneurs – should be supported!” 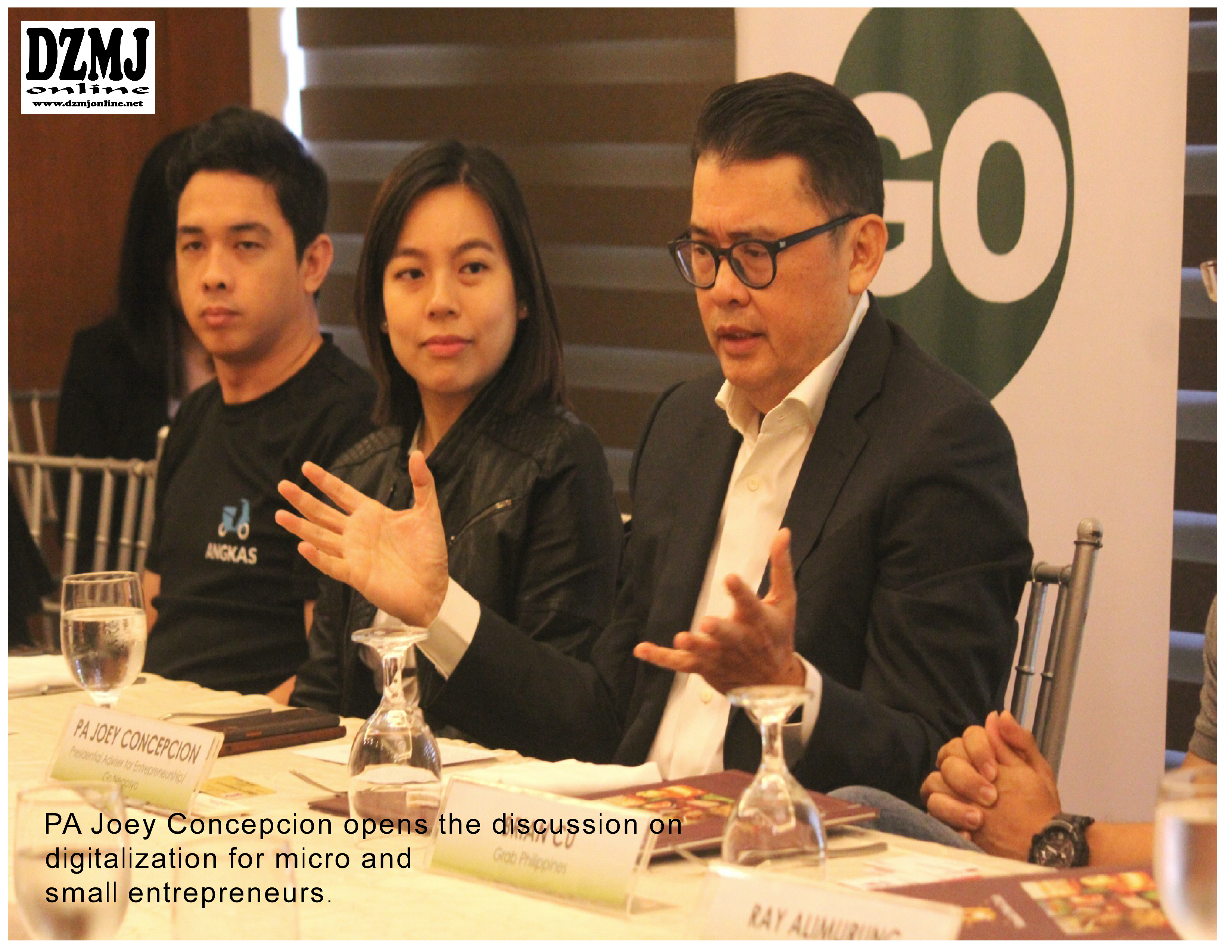 Concepcion is hopeful that the TRO will be lifted for the benefit of all. “I am glad that Sec. Art Tugade is forming a committee to work things out. The rejection of Go Jek should be reconsidered, because the more market platforms that are open, the better it is for the consumers and the small entrepreneurs. This will actually help increase the salaries of house-helpers, drivers, and other skilled people as they have the opportunity to be their own bosses. This is one way of fast-tracking the goal of inclusivity in this country.”

In closing, Concepcion said, “I am glad that our business chambers believe that digitalization is the game-changer in poverty reduction. Together with the rest of the private sector, we would like to influence and educate more Filipinos about digitalization. This is the 4th Industrial Revolution and this is where we are all headed. We should empower more people to go digital, embrace the change, and continue to enjoy the convenience, efficiency and effectivity of these platforms. 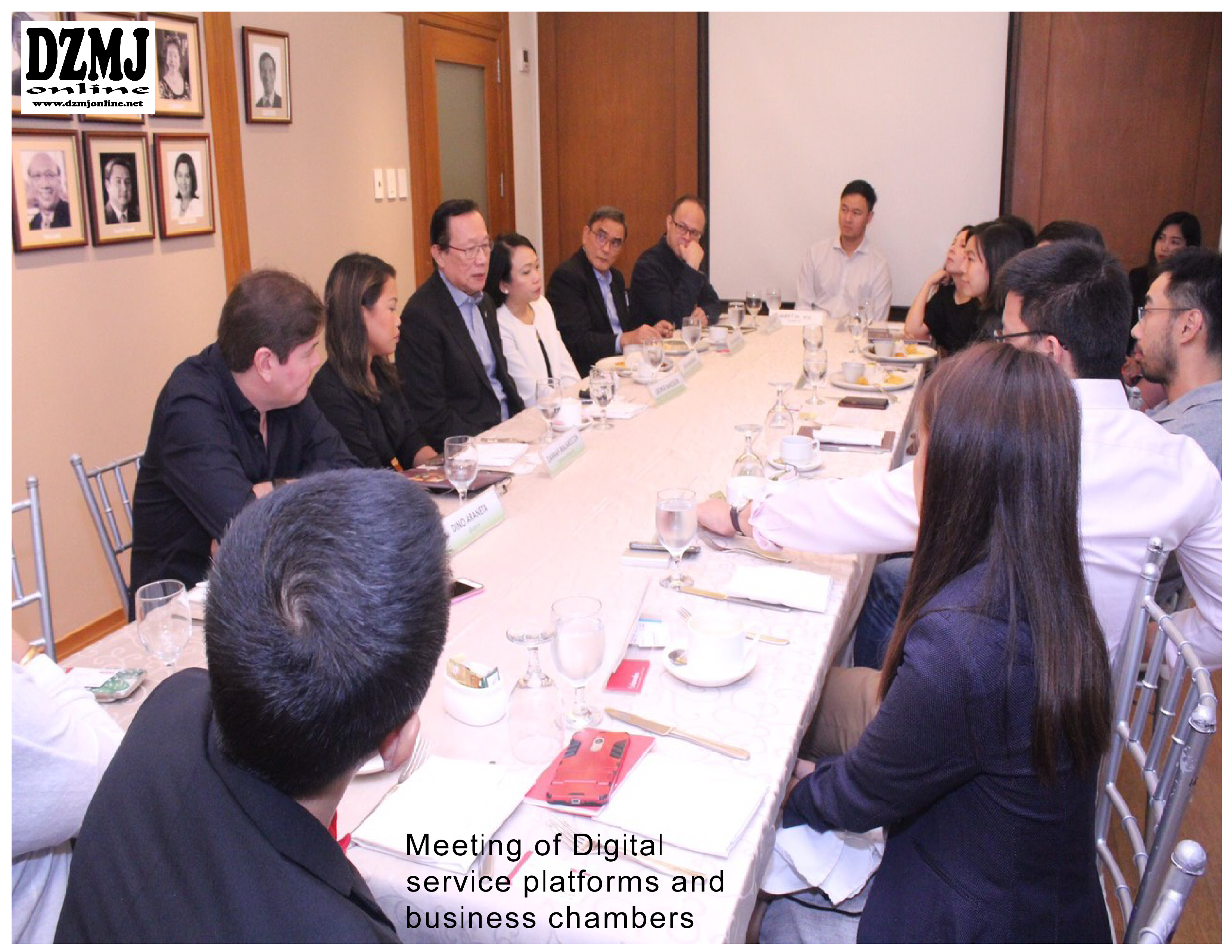 “With this, I can say that digitalization is pro-poor where people from low-income communities can benefit and achieve prosperity!”

Go is a firm supporter of the advocacies of Go Negosyo. Presidential Adviser for Entrepreneurship added: “The President’s mandate is to support inclusivity most especially the growth of micro and small entrepreneurs. Bong Go is one of the reasons why our programs on entrepreneurship for the past three years has been supported by President Duterte. Basically the private sector and the government partnering together in helping our MSMEs in the Philippines is in the President’s heart towards the success of all. Bong Go serves as an instrument in bringing prioritizing and highlight inclusive growth for entrepreneurs.”

Go also attended the Mentor Me On Wheels held in Davao last July 2018 wherein he also met with aspiring and existing microentrepreneurs. He has also attended most of the entrepreneurship programs with President Duterte.

This Mentor Me On Wheels is a free 1-on-1 mentoring session for aspiring and existing entrepreneurs. In this special session, Go Negosyo partnered with two of the biggest franchising organizations in the country – Philippine Franchise Association and Association of Filipino Franchisers Inc. Apart from this, 120 franchise owners from PFA and AFFI joined the mentoring session on franchising and shared knowledge to more than 600 aspiring and existing entrepreneurs and franchisees.

Go Negosyo’s Mentor Me On Wheels aims to complete 30 roll outs this year to expand its reach to more Filipino entrepreneurs around the country.

Through MMOW and Mentor Me Online — the mobile application for mentoring, Go Negosyo and its partner, Department of Trade and Industry (DTI), introduce mentors to micro and small entrepreneurs, and offers technical know-how and practical entrepreneurship strategies. 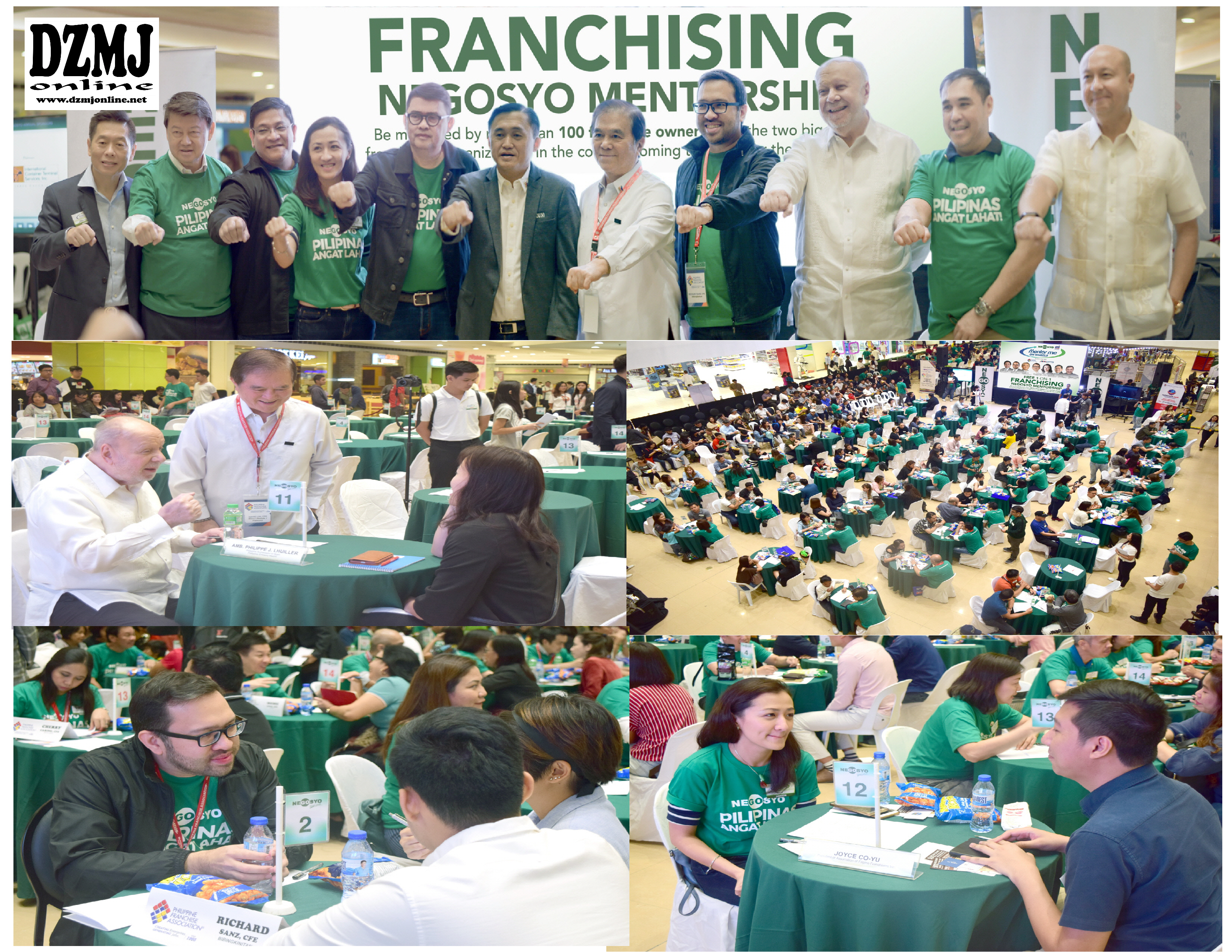