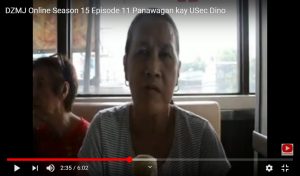 The Department of Agriculture-Bureau of Plant Industry (DA-BPI) andtThe Los Baños-based Southeast Asian Regional Center for Graduate Study and Research in Agriculture (SEARCA) have formalized their partnership in establishing gardens under the DA-BPI Urban Agriculture Program in an agreement signed on 22 June 2020 at the DA Main Office in Quezon City. Signatories to the memorandum of agreement are Agriculture Secretary William D. Dar and SEARCA Director Glenn B. Gregorio.

The DA-BPI is leading the implementation of the Urban Agriculture Program “as one of the modalities that renders safe food available, accessible, and affordable while providing additional income to households and communities in urban areas.”

“During this pandemic, we have to really secure every space and see to it that we turn this challenge into an opportunity for agriculture and food,” Dar said.

“I would like to thank SEARCA under the leadership of Glenn Gregorio for this opportunity to partner with them in promoting and pursuing urban agriculture in a big way” Dar said during the signing rites.

He said “because of the pandemic, people realized the importance and the source of our food or the food system and start to appreciate how fragile it is and how important food security is.”

“With this partnership, I think we will all the more link the academe, the industry and the government. With these three linked together, I think we will have a more sustainable implementation of the urban agriculture program. I think we can have a big impact at the community and the city level,” Gregorio said.

In a policy paper it released this month, SEARCA identified ways to influence the adoption of urban agriculture. Among these is the need for a massive intervention for wide understanding of urban agriculture and the need to reignite the Filipinos’ love of planting and growing their own food to pave the way to more adoption. SEARCA’s recommendations will be addressed through this project wherein DA-BPI encourages crop production and community gardening using various technologies in households, barangays, schools, and public offices.

The SEARCA policy paper also indicated the need for the implementation of urban agriculture to be easy to follow, require less inputs, and customized depending on the conditions in the garden site.

The DA-BPI has allocated funds for the provision of starter kits that include agricultural inputs and any needed technical assistance for the individual or household beneficiary. It also provides funds for the setting up or enhancement of barangay, community, school or university, and public office gardens, including the gardens that SEARCA will establish under the new partnership with DA-BPI.

“With this project with DA-BPI, SEARCA is walking its talk to help show the big potential of urban agriculture to sustain urban families with their needed food both in terms of quantity and quality, especially in times of food disruption brought about by COVID-19, climate hazards, and natural disasters,” Gregorio said. 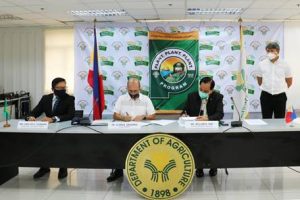 The Integrated Urban Agriculture Act (HB 3412) has been approved by the House Committee on Agriculture last June 17. HB 3412 seeks to promote an integrated urban agriculture to address food security problems affecting the country, which were exacerbated by the COVID-19 pandemic.

The policy paper is jointly authored by Dr. Rico C. Ancog and Dr. Glenn B. Gregorio of SEARCA and the University of the Philippines Los Baños, House Representative Arlene B. Arcillas, Erlinda C. Creencia of the Santa Rosa city government, Victorino Aquitania of CLEI-Local Governments for Sustainability–Southeast Asia, Department of Agriculture-Bureau of Plant Industry (DA-BPI) Assistant Director Gerald Glenn F. Panganiban, and Garry A. Hidalgo of Farm Factory and Rotary Club of Bay. They brought to the policy paper their collective experience in a diverse mix of sectors that include the academe, science and technology, environment, agriculture, private industry, civil society, legislature, and local government.

“It will be strategic for local government units to implement an Urban Agriculture Strategy to sustainably mainstream it in local governance,” the SEARCA policy paper authors stress.

Studies have shown that planning for urban agriculture tackles a combination of already existing urban issues in livelihood and income opportunities, food availability and accessibility, and, in many cases, conflicting land uses.

SEARCA Director Dr. Glenn B. Gregorio said “the challenge of optimizing limited space, including high-risk areas, is addressed by the Comprehensive Land Use Plan (CLUP) of LGUs and, as such, it provides the most appropriate and likely the most effective platform to mainstream urban agriculture.”

The SEARCA paper points out the need for LGUs to pass an ordinance institutionalizing, developing, and promoting urban agriculture, including mainstreaming it in the CLUP and Local Climate Change Action Plan to ensure funding and support by the city or municipal council.

Under HB 3412, in coordination with DA and Cooperative Development Authority (CDA), LGUs will tap neighborhood associations and people’s organizations to undertake community gardening.

The SEARCA paper highlights that the capacity of the barangay officials on urban agriculture would be very critical to operationalize the plans and projects. As they formulate their own development plan, the barangays are in the best position to identify or vet in identifying appropriate open spaces for urban gardening and in exploring potential funding sources to support urban agriculture.

Dr. Ancog and his co-authors also emphasize that “the role of the city or municipal agriculture officers is crucial to sustain urban agriculture initiatives with strong partnerships and collaboration with government line agencies such as DA-BPI and local state universities and colleges.”

The SEARCA paper pushes for the passing of ordinances for tax reduction schemes, lease agreements, and zoning mixed-land use areas that would afford an enabling environment to encourage LGU constituents to engage in urban agriculture.

Since exploration of financing schemes would be essential to sustain efforts on urban agriculture by LGUs and its partners, the SEARCA chief said his team indicates that “the Agriculture Office of every LGU can allocate budget for urban agriculture in the Annual Investment Plan, organize farmers’ associations and cooperatives, and through private and industry partners, among others.”

In addition to the proposed urban gardening sites under HB 3412, the SEARCA paper advocates for open space and parks managed by LGUs to be planted with both agricultural crops and ornamental plants, which can also boost tourism and be a learning place for schoolchildren.