Still reeling from the impact of Covid-19, Philippine merchandise exports in May 2020 amounted to USD 3.99B, an increase of more than USD 1B from April’s USD 2.83B—the lowest recorded value in since the global financial crisis in 2018.

“Since the community quarantines were declared in mid-March, we can see its full effects on April figures. We are glad to see that businesses are reopening and that Philippine products are slowly making their way back to the global market,” said DTI Undersecretary for Trade Promotions Abdulgani Macatoman. 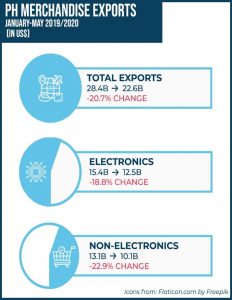 The top export product remained to be semiconductors, with a 42.7% share of all exports and 77.2% share of electronics exports YTD. However, semiconductor exports were down 14% to USD9.3B in January to May 2020 from USD11.3B in the same period in 2019.

Compared to May 2019, the biggest decliner in May 2020 was from ignition wiring set and other wiring sets used in vehicles, aircraft and ships (70.4%), as land and sea travel grind to a halt worldwide. Other manufactured goods and chemicals also experienced steep falls in sales at 50.6% and 37.2% respectively. 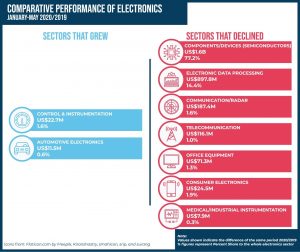 On the other hand, exports of textile yarns and fabrics nearly doubled, with a 90% growth in May 2020—which can be attributed in part to the increasing demand in personal protective equipment (PPE) and the Confederation of Wearable Exporters of the Philippines’ (CONWEP) efforts to promote their sector. 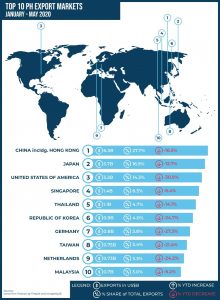 Philippine exports are also the hardest hit both for year-on-year (YOY) and YTD when compared with 10 other Asian economies. For May 2020, all 11 economies had negative growth and for YTD, only Singapore and Taiwan managed to grow their merchandise exports at 4.1% and 1.4%, respectively.

“We are also urging exporters to register in the European Union-Registered Exporter System (EU-REX) for them to begin or continue exporting to the EU. There are now 309 registered exporters as of 8 July 2020,” he continued.

According to the World Trade Organization (WTO), world merchandise is seen to fall by between 13% and 32% this year due to the Covid-19 pandemic. Recovery is projected in 2021, depending on the pandemic duration and the effectiveness of global economies’ policy response.

Oxford Economics sees a negative 12.5% growth rate for exports of PH goods and services in 2020. It also projects a moderate recovery starting June as economic activity slowly picks up following the easing of restrictions in major cities of the country except for Cebu City. However, the continued weak global demand for the rest of the year dampens the outlook for PH exports. END

The Philippines, being a tropical country, is considered to be a dengue hotspot according to the Center for Disease Control’s 2019 Dengue Map, thus making the virus a constant biological health hazard.

In 2019, the Department of Health declared a national dengue epidemic after it recordedmore than 145,000 cases in the first and second quarters of the year that was almost twice than the previous year. Of the thousand cases reported every year, fatalities are at record high among children stricken by the virus based on DOH’s 2019 data.

For years, it has been a recurring problem for the Philippine government and since the virus has no cure aside from supportive treatment, DOH and the Department of Science and Technology (DOST) have come up with ways to prevent the spread of the virus such as the former’s 4 O’clock habit program and the latter’s Ovicidal Larvicidal Traps.

Luckily, the government is not alone in this struggle to defeat the dengue virus because Filipino inventors have joined the cause to find solutions through their unique and noteworthy inventions. In particular, one invention has proven its great potential in the large-scale dengue outbreak prevention – creatively called the MYLK Kiti-KitiX.

Developed byLyle Christian R. Herbosa, the MYKL Kiti-KitiX, based on an earlier report is claimed to be effective in killing dengue-carrying mosquitoes by the Research Institute for Tropical Medicine (RITM), the University of the Philippines, Los Baños – Center for Health Development (UPLB-CHD), and the Bureau of Animal Industry (BAI).

Herbosa’sproduct is a mixture of 60-90% calcium hydroxide and 5-40% clinoptilolite and is used against mosquitoes in the immature stages and is also effective in controlling the emergence of adult mosquitoes that can act as disease carriers.

“My product targets eliminating the early stages of the mosquito. This will terminate the life cycle of the mosquito therefore stopping any emerging adults from spreading dengue. Unlike my competitors, said repellent/killing agents only kill the mosquitos present in the area while my product prevents them from multiplying and spreading the disease” said Herbosa when asked to differentiate his product from other mosquito killing agents in the market.

According toHerbosa, his product kills the threat of a dengue outbreak at its earliest stage unlike other products that target only the adult mosquitoes and cause them to be driven away, thus forcing them to breed in neighboring places. Another promising feature of this product is the shelf-life and its effectiveness to kill mosquitoes and their eggs or larvae with its long lasting effect from the time it is initially applied that can last from 11 to 23 months.

With this invention, dengue prevention can take another notch forward if adopted on a national scale in order to prevent dengue outbreaks in places where mosquito-breeding sites are found.

Incidentally, the MYKL Kiti-kitiX project is the first to have successfully availed of DOST-TAPI’s iTECH Lending Program in partnership with Land Bank of the Philippines. The Program provided Herbosa Php 10.625 million loan for the upscale commercialization of his product.

“With the funded money provided by iTECH Lending Program through LBP and TAPI -IGF, I have invested it to produce my product as well as allow it to become commercially available to our direct consumers” added Herbosa

Furthermore, the product has undergone pilot testing in the Davao Region and in the Cordillera Administrative Region with both Regional DOH offices of the said areas giving the MYKL Kiti-kitiX a high efficacy remark for its outstanding results.Herbosa also added that he was able to introduce his product to numerous local government units across the country through the financial assistance from DOST-TAPI.

MEDIA ADVISORY FOR THE 30TH ANNIVERSARY OF THE JULY 16, 1990 M7.8 LUZON EARTHQUAKE
The Department of Science and Technology-Philippine Institute of Volcanology and Seismology (DOST-PHIVOLCS) commemorates the 30th year of the M7.8 1990 Luzon Earthquake with back-to-back activities.
I. Photo-sharing activity
Share your stories about the 1990 Luzon Earthquake through original photographs of the event. These photos will be a part of our archive and will be used for DOST-PHIVOLCS information and education materials. All contributions will be credited properly.
WHO: Open to all
WHEN: July 03 – 16, 2020
HOW: Email the photos to 1990luzon@gmail.com with your name and photo title as the email subject, then fill out this online consent form https://bit.ly/Photo-sharing
II. InfoBit Webinar: Understanding the DOST-PHIVOLCS Earthquake
Information DOST-PHIVOLCS aims to help the public familiarise themselves with the Earthquake Information posted on the agency’s website and social media accounts during earthquake events.
WHO: Open to all
WHEN: Registration link (https://bit.ly/InfoBitRegistration) is open from July 9, 2020
until July 13, 2020 @ 4:00 PM
Webinar is on July 15, 2020 9:00 AM
WHERE: Google Meet
Live stream via PHIVOLCS Facebook Page and YouTube channel
III. Virtual Launching of DOST-PHIVOLCS Innovation for DRR and InfoSentro sa PHIVOLCS DOST-PHIVOLCS will launch its latest web-based tool, GeoMapperPH, and provide updates on the Philippine Seismic Network through the Infosentro sa PHIVOLCS.
WHO: Media, LGUs
WHEN: Registration link (https://tinyurl.com/LuzonEq-Infosentro) is open from
July 10, 2020 until July 13, 2020 @ 3:00 PM
Infosentro sa PHIVOLCS is on July 16, 2020 9:00 AM

DTI-BPS adopts standard on graphical symbols for use on equipment