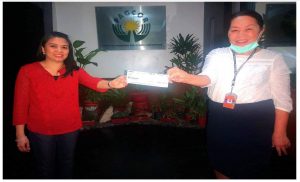 April 14, 2020
PAGCOR remits additional P6 billion to the Office of the President

After recently remitting a total of P20.5 billion to government coffers in response to the country’s fight against the Corona Virus Disease-2019 (COVID-19) pandemic, the Philippine Amusement and Gaming Corporation (PAGCOR) released on April 13 an additional P6 billion to the Socio-Civic Funds Project (SCFP) of the Office of the President (OP).

With this recent remittance, PAGCOR’s total contribution to the OP alone now stands at P14.5 billion.

On March 24, PAGCOR turned over P6 billion to OP, in addition to the P2 billion and P500 million remittances that were released on March 11 and March 1, respectively. These were on top of the P12 billion cash dividends that PAGCOR remitted to the National Treasury on March 23, 2020.

According to PAGCOR Chairman and CEO Andrea Domingo, PAGCOR’s remittances to OP are intended for various funding requirements relative to Proclamation No. 922 “Declaring a State of Public Health Emergency throughout the entire Philippines” and the subsequent declaration of the Enhanced Community Quarantine (ECQ) in Luzon, which was extended until April 30, 2020.

“The recent remittance to OP is pursuant to PAGCOR’s mandate to allocate its earnings to finance infrastructure and socio-civic projects,” Domingo explained.

“Despite experiencing losses due to the suspension of operations of our owned and licensed gaming facilities for almost a month now, we are doing our best to provide much-needed help to the government during this time of crisis,” Domingo said.

Apart from its remittances to the national government, PAGCOR, as well as its licensees, have also been donating food packs, personal protective equipment and other medical essentials to frontliners, hospitals and communities in the National Capital Region and some parts of Luzon. The charitable arms of Entertainment City casino licensees have likewise extended direct assistance such as Okada Manila Foundation’s P25 million cash donation each to the Philippine Heart Center and Lung Center of the Philippines, and Bloomberry Cultural Foundation’s retrofitting of Rizal Memorial Sports Complex and Ninoy Aquino Stadium into temporary COVID hospitals.

On behalf of the OP, Deputy Executive Secretary for Finance and Admin Rizalina Justol commended PAGCOR for its unrelenting support to the government.

ACT Teachers Rep. France Castro has condemned the harassment and illegal detention of former Anakpawis Rep. Ariel Casilao and volunteers of the Tulong Anakpawis and Sagip Kanayunan relief operations in Bulacan on April 19.

Castro, who is also the House assistant minority leader, said Casilao was leading the distribution of relief goods to urban poor residents in Norzagaray, Bulacan when the vehicle he was riding in was stopped by the police.

“We vehemently condemn the harassment and illegal detention of relief volunteers in Norzagaray, Bulacan including former Anakpawis Rep. Ariel Casilao who were merely delivering aid to families most in need amid the COVID-19 pandemic,” Castro said. “The police have no reason to detain the volunteers. We demand their immediate release. Kailan naging krimen ang pagtulong sa mga nangangailangan ng pagkain sa panahon ng krisis?”
Casilao and his companions were stopped at the Norzagaray checkpoint at 10:15 a.m.

Six volunteers, including Casilao and the driver of the jeepney were brought to the police station and are still currently held at the Bulacan Police Provincial Office (BPPO) in Malolos City.
“The Duterte administration has already been very slow in the delivery of aid and medical solutions in this COVID-19 pandemic, now they are imposing ‘mala-martial law’ policies that only intensify human rights violations and further blocking the delivery of aid to those who most need it,” Castro added. “Bayahinan na nga ang ginagawa ng mga mamamayan. Tumutulong na ang mga organisasyon at pribadong mga mamamayan at nag-volunteer dahil nakita nila na kulang na kulang ang ginagawa ng gobyerno sa kung ano ang kailangan ng kaniyang mamamayan tapos ang sukli na ibinibigay nito ay harasment at ilegal na detensyon?”
“It is not a crime to provide relief to other fellow Filipinos who are most in need in this crisis. On the other hand, it is the responsibility of the Duterte administration to provide socio-economic relief to the hardest-hit families during the enhanced community quarantine. President Duterte cannot use threats and harassment against people who are trying to help those being neglected and being left by the government to starve,” Castro added.

“The Duterte administration should impose systematic medical solutions, not martial law-like conditions that do nothing to stop the further spread of the virus. In these times of a health crisis, we need science not threats and intimidation of the population,” she concluded.By MARVYN N. BENANING

ACT Teachers Rep. France Castro has urged the Department of Labor and Employment (DOLE), the Department of Education (DepEd) and the Commission on Higher Education (CHED) to provide assistance to private school teachers.
“We have received many complaints from private school teachers saying they have yet to receive any socio-economic aid from the government amid the enhanced community quarantine due to the COVID-19 pandemic,” Castro said. “Educators in the public and private sector in both basic and tertiary education also need socio-economic aid brought by the impact of the COVID-19 pandemic. A number of private school teachers and education support personnel in the private sector are still contractual employees and are no-work-no-pay workers and should be included in the amelioration programs of government.”
“Teachers in both public and private sectors are already excluded in the Social Amelioration Program (SAP) from the Department of Social Welfare and Development (DSWD) while many private schools were not able to meet the deadline for the DOLES’s COVID-19 Adjustment Measures Program (CAMP) which prevented their employees to avail of the P5,000 one-time assistance to workers in the private sector affected by the suspension of work in the enhanced community quarantine,” Castro stressed.

Private schools are also not considered as part of the micro, small and medium enterprises that also prevent schools from availing amelioration programs for SMEs, she noted.

“Teachers are now uncertain if they would be able to avail of any government amelioration program,” Castro said.
“Teachers in both the public and private sectors are not spared by the adverse effects of the enhanced community quarantine. We urge the DOLE, DepED and CHED to also extend aid to teachers in need of financial assistance amid the COVID-19 pandemic. We are already into the sixth week of the enhanced community quarantine, it is high time that the Duterte administration, especially the DOLE, DepEd and CHED, look into providing socio-economic aid to our educators in need amid the COVID-19 pandemic,” Castro concluded.By MARVYN N. BENANING

No less than 10,000 students have signed a petition calling on the University of the Philippines (UP) to end the semester and promote students.

The petition was crafted after the COVID-19 lockdown was extended and forced students out of campuses, pushing the UP administration to adjust.

It also compelled the UP Presidential Advisory Council (UPPAC) to propose a policy imposing heavier loads for students and faculty for the succeeding academic year.

In response, the Rise for Education Alliance – UP Diliman (REA-UPD) launched a petition addressed to the Board of Regents (BOR) to end the semester and promote students while suggesting apt and humane adjustments.

“The call of the university community is clear, yet the board acts deaf to our demands.” said Rise for Education Alliance – UP Diliman convenor, Tierone Santos.

“We strongly reiterate our call for mass promotion for all students with no one receiving a failing mark, as the most humane and fair solution. This is to ensure that students will not be academically penalized for merely being in a situation not of their choosing, and to conduct their orderly transition towards succeeding semesters,” Santos argued.

The petition garnered more than 10,000 signatories despite the board’s ruling to prolong the semester for another year with a pass or drop policy.

According to the UP Diliman University Student Council’s survey among students, 4,977 or 61.6% of the total respondents agreed to end the semester and promote students.

Moreover, many faculty members have already passed their students.

“We cannot ignore mass clamor as this crisis takes a huge toll on the university community’s psycho-social well-being. Let us not demand immediate productivity from students but instead, we inculcate compassion from them,” Santos stressed.

“Our education goes beyond the classroom and into the communities as we devote our knowledge, skills, and talents as Iskolar ng Bayan in providing solutions to overcome the pandemic,” Santos noted.

He reiterated the essence of truly serving the people and upholding honor and excellence is by fighting alongside the people and collectively battling this crisis. By MARVYN N. BENANING