Antipolo City, Philippines- THE BLIND moderates while the crippled, mute, deaf and others joyously participated in games and gift giving four days after one of Christendom celebrated holidays regularly practiced in the Philippines, particularly where the “Our Lady of Good Voyage” resides.

No exemption from the other sectors being treated as second class, still the group headed by Eljoy Ilagan remains firm and dignified amidst their shortcomings. Lacking all kinds of support from government whom even tarpaulin banners failed to provide, Eljoy and his team continue the promise that they will have their Chistmas Party.

A season of joyous gift giving, mostly for the rich and affluent and the so called “normal” class here in the Philippines, the PWD sector not just those of Eljoy’s group has not been given equal opportunities.

Speaking with Aileen Yamazaki, a blind translator from Japan in an exclusive interview with then www.diaryongtagalog.com the former domain of now www.diaryongtagalog.net  says that opportunities for PWDs here in the Philippines in terms of employment is unlike anything in the world. Companies expect more and there are a lot of discriminations. For the common and number one criteria with pleasing personality, not on the talent they have.

Not all PWDs are fortunate enough to be educated in such a way where they can contribute to the greater economy of the country. It is the realization that most Filipino PWD inscribed in their minds because of their so called shortcomings although that’s not entirely true.

The PWDs if incorporated in the mainstream society as equals like in other parts of the world, they can be as productive as anybody else. With sufficient opportunities for employment, business and education, including proper legislation and implementation of laws the mere term “PWD” will never be on the highlight.

An interview at www.diaryongtagalog.net with Mrs. Cynthia Mallari visual disability, a wife of a driver named Marcos who is suffering from high blood pressure.  A PWD herself who has two PWDs son, Marlon Mallari, 26 with hyper depression cause of bullying now with high maintenance medicine whom most of the time they  lack the budget for medicine composed of 2 for sleeping and another  2 medicine to normalize and lessen his extreme hyperactivity.

One of which has been fortunate enough to study primary, secondary and now college in a so called “normal” school who already finish his associate degree last March 2013 on Computer Technician and now aspiring to become a Police Officer, Mark Andrew Mallari, 24 with autism now studying Criminology.

A sympathy and unheard sentiment of an understanding and loving mother from the catastrophe in their family with Mark Andrew experience rape at the age of 16 by an alleged guy with who are a son of a former Mayor.

In the compound where they lived, even surround by relative they are treated as crazy family and belittled by the surroundings by means of bullying, brutally hitting Mark, and when Mark ask for help nobody attends to him or even listen. Mark when to the police headquarters to complain about the incident that almost kill him.

So in disgust and disappointment that the Antipolo police officer in-charge just ignored him and instead insulted him for being crazy and mentally impaired, he has always been denied of justice because he’s autistic.

Besides the success that Mark has achieved last July 2012, over- all champion on painting contests in the whole province of Rizal, the unstoppable incident and bullying after he graduated his 2 year course prompted a realization for Mark to strive hard and taking the course on Criminology.

In the hope that someday he and his fellow PWDs will not be maltreated because he will be the one to protect his sector. With Amanda, 17 year old the younger sister of the two whose also taking up Criminology in the same school.

Even the courier that distributes utility bills in their area, envious neighbor- relative denied that they are resident of the place and most of the time they don’t receive electric bill, water bill.

Her proper guidance and moral support to her children and others earned them the prize of being one of the inborn PWD who could finish college. Eljoy Ilagan who dreamt of having a happy celebration succumb to the realization that even though they were different, still they are all created with greater  purpose in this world with broadcaster Rommel San Pascual (the Cobra Award Winning Blind Broadcaster , both aren’t born blind instead they’ve become one through circumstances).

The party  started 4 in the afternoon last 29th of December at the gazebo fronting the church of the Our Lady of Good Voyage, few goodies where provided by the Local Government Unit but bulk are from supporters who believed in what the sector can do. About 200 PWDs attended the activity from 4pm onwards.

IT is not easy for persons with disabilities to mingle in the public places like parks but The Person with Disabilities (PWD) in Antipolo were courageous enough to showcase their talent. Indeed the PWDs Christmas party in Antipolo Philippines shares the joy of the season in a ways simple and from the heart.  (mary jane olvina-balaguer) 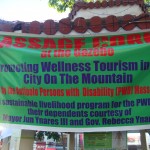