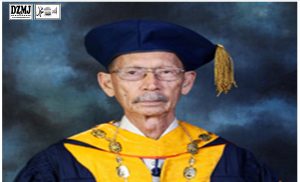 National Scientist Edgardo D. Gomez, an authority in the field of marine science, has passed away on December 1, 2019 at the age of 81.

NS Gomez was a known researcher, scientist, conservation advocate, and mentor in invertebrate biology and ecology, giant clam culture and restoration, and coral reef assessment and conservation. He was also recognized for his outstanding contributions and researches on marine ecosystems which became the bases for management of and the conservation programs for the country’s marine resources.

Through his pioneering research, he was able to steer the world’s first national-scale assessment of damage to coral reefs that led to the widespread concern over the status of coral reefs. This resulted to the worldwide conservation initiatives, such as the Global Reefs and Risk Analysis, Global Coral Reef Monitoring Network, and the International Coral Reef Action.

He served as the Founding Director of the Marine Science Institute (MSI) at the University of the Philippines (UP), a world-class research and teaching institution in marine science and is an internationally renowned center of excellence for national and scientific initiatives.
One of his most notable works was his contributions in the baseline mapping of the Philippines to handle the highly-contested Spratly Islands and in the groundwork for the Archipelagic Studies Program that the UP System has established.

He was elected as a member of the National Academy of Science and Technology Philippines (NAST PHL) in 1993 and was proclaimed as National Scientist in 2014.