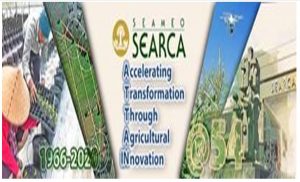 In a policy paper released last May 29, SEARCA recommends agricultural clusters as a strategic approach “to operationalize the appropriate channels at a scale necessary for it to have enhanced competitive strength to connect with national and international markets.”

The importance of the agricultural clustering approach has been identified as a major intervention in the Philippines to significantly improve yield and income from the agriculture sector, according to Department of Agriculture (DA) Undersecretary Rodolfo V. Vicerra, a co-author of the policy paper.

The paper co-authors pointed out an agricultural cluster is effective when there is a strong market connection and value-adding networks as a result of enhanced farmer-to-farmer interaction, value chain, and interventions such as training, investment, and subsidies.

A study showed that vegetable farmers in Mindanao had significantly increased their production of and income from sweet pepper, bitter gourd, squash, eggplant, chayote, tomato, Baguio beans, okra, and sword pepper after joining agricultural clusters. SEARCA noted that on the average, the farmers’ income from vegetable production increased by 47% from PHP 4,909/month to PHP 7,192/month.

“Small is beautiful but big is powerful,” SEARCA Director Glenn B. Gregorio surmised.

Dr. Gregorio said government agencies and R&D institutions must promote specific institutional interventions to facilitate the intended benefits of the agricultural clusters. He explained that R&D institutions can serve as “cluster champions” to strengthen the technological capacity of cluster members and promote partnerships.

On the other hand, an umbrella of programs and institutions to support agricultural clusters at the national level can be provided by government, Dr. Gregorio said.

A week after SEARCA published its policy paper, the DA declared that starting this year it will “vigorously push for farm clustering and consolidation, being one of the key strategies to level up the Philippine agriculture sector.”

Agriculture Secretary William D. Dar urged farmers to “scale up by clustering and consolidating their farms to attain economies of scale.” He stressed the importance of coming together “to optimize the interventions and assistance provided by the DA and other government agencies.”

The DA chief said it is easier and more cost-effective to deal with organized farmers than individual farmers as DA provides training and farm inputs like seeds and fertilizers, and farm equipment and machinery.

Secretary Dar added that the DA will offer clustered and consolidated farms with incentives on top of the regular technical and marketing assistance under its major commodity programs. “Incentives will come in the form of farm machineries such as tractors, harvesters, mechanical dryers, and processing equipment and related infrastructure,” he said.

DA-NCP Director Lorenzo Mamauag Caranguian said NCP will recommend a “no cluster, no assistance” policy in terms of production, postharvest, processing, and marketing assistance as a way to encourage farm clustering and consolidation.

A report on organic and inorganic farming, which have been on the opposite ends of a polarizing issue in agriculture, has been published by the Southeast Asian Regional Center for Graduate Study and Research in Agriculture (SEARCA).

The report bares the science and practice of organic and conventional agriculture and ways the two farming approaches might be integrated to achieve food security as discussed by scientists and practitioners during a forum convened by the Coalition for Agriculture Modernization in the Philippines, Inc. (CAMP) in partnership with SEARCA, the Philippine Council for Agriculture, Aquatic, and Natural Resources Research and Development (PCAARRD), and the University of the Philippines Los Baños-Institute of Plant Breeding (UPLB-IPB).

“With enlightened moderation on both sides, we can enjoy the best of both worlds and make organic and inorganic farming work in the Philippine context,” National Scientist Dr. Emil Q. Javier said during the forum.

The report comprises the full presentations and discussions on the science and practice of organic farming by UPLB-IPB Director Dr. Rodel G. Maghirang; experiences and advocacies of organic farming by Pablito M. Villegas who owns Villegas OrganiKs and Hobby Farm; science and practices of inorganic farming by UPLB Agricultural Systems Institute Director Dr. Pearl B. Sanchez; scientific bases of integrated organic and inorganic farming in the Philippines by CAMP member and National Academy of Science and Technology (NAST) Academician Dr. Eufemio T. Rasco, Jr.; and enjoying the best of both worlds: mainstreaming organic practices in conventional agriculture by Dr. Javier who is also the CAMP chair.

“CAMP advises a win-win strategy that integrates both organic and inorganic practices, depending on farmers’ ability and situation,” SEARCA Director Dr. Glenn B. Gregorio said.

He added that “this integration will assure complementarity while benefiting from the two systems, with soil organic matter enhancing the efficiency of nutrient use from chemical fertilizers.”

With the integration of good farming practices, CAMP believes that there is a greater chance to improve and sustain soil productivity and high yields in order to meet the needs of the ever-growing population and provide for a cleaner environment. The full report may be downloaded from the SEARCA website for free. source: SEARCA UPLB

we act as one: thriving partnership in the midst of pandemic