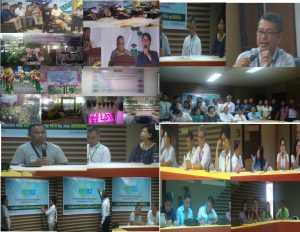 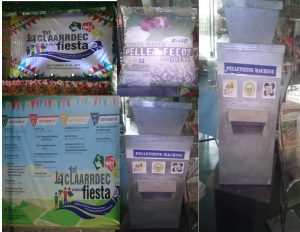 SEPTEMBER 27, 2017-IN the advent of a stunningly fast phased society, revolutionary and innovative ways in circumventing the usual is a potent tool for survival.

With this in mind, the Central Luzon State University research on small ruminant particularly “goat” thought about goat feeding to the “next level”.

Traditionally, goat herders just let their goats on the open field to eat grass, some gather grass while their herd are safely housed in a barn. The problem is when continuous downpour occur, the farmer may not be able to gather grass for his herd.

This is when science, technology and innovation intervene. Researchers from the CLSU devised the “Pelletizing Machine Essential for Feed Production” to augment the farmer and still feed his herd if grass were not available. On a partial interview with Ms. Lenylyn G. Manalili, Researcher Instructor 1 at the CLSU Small Ruminant Center during the five day Philippine Council for Agriculture Aquatic and Natural Resources Research and Development Farms and Industry encounters Through Science and Technology Agenda (PCAARRD FIESTA) spearheaded by their consortium in Region 3 the Central Luzon Agriculture, Aquatic and Natural Resources Research and Development Consortium (CLAARRDEC) at the CLSU gym she says that the pellets are legume based or from indigo and ipil ipil.

www.diaryongtagalog.net ask about the process the pellets was made she told us that the gathered legumes was first dried then hammered and then put into the mill or the machine. Pelletizing machines are no longer ordinary in the agriculture sector or in the feed industry but the pelletizing machine we often encountered are producing large volumes of output but the machine devised by Dr. Edgar A. Orden, VP for UBAO, CLSU is Portable or catering to small herders and can be put up in a small space. Utilizing this innovative method will greatly increase the income of the farmer or herder and enticed him to continue raising small ruminant like goat or maybe sheep for its practicality and profitability. DOST PCAARRD was represented by their Deputy Executive Director for Research and Development Dr. Edwin Villar. ///michael N. Balaguer, 09333816694, michaelbalaguer@diaryongtagalog.net

SEPTEMBER 28, 2017, SCIENCE CITY OF MUNOZ in Nueva Ecija as part of the continuing 5 day Farms and Industry Encounters with the Science and Technology Agenda (FIESTA) spearheaded by the Central Luzon Agriculture Aquatic and natural Resources Research and Development Consortium (CLAARRDEC) of the Philippine Council for Agriculture Aquatic and Natural Resources Research and Development of the Department of Science and Technology (PCAARRD DOST) to boost the number of grade 9 or third year high school students to get interested in agriculture and agriculture related discipline when they enroll in colleges such as the Central Luzon State University (CLSU) and others.

Dr. Regidor G. Gaboy, the leader of the project “AGRISIKAT” Sa Agrikultura Sisikat ka, A Career Advocacy and Family Engagement on Agriculture and Fisheries with a tagline “ sa Agrikultura,may future ka, may kita ka, may ibabahagi ka” the one year life span of the project aimed at replenishing the pool of agricultural workers, scientist, engineers, technicians and technologist coupled with a bit or entrepreneurial training to as to compete in the global market or at least ASEAN since we’re economically integrated already.

The Average age of a common Filipino farmer is 54 and its number is diminishing rapidly due to the influx of migrants to non agricultural industry. The key is proper communication and education, through the Commission on Higher Education (CHED) Department of Education (DepED) and the Technical Education and Skills Development Authority (TESDA, the dwindling number of our farm-based population will gradually increase through by enticing the youth to be an “AGRIPRENEUR” or as the President of the CLSU, Dr. Tereso A. Abella explained, that they have to hybridized the agricultural sector to get the parents enlightened that the agriculture or the ancient times isn’t the agriculture of today so the the song “magtanim ay di biro” is already passe.

Parents especially those that are farmers and fisherfolk should understand through the “Agrisikat” program that there are several agriculture courses are being offered in the State Colleges and Universitries (SUC) not just the usual farm worker, examples of these are Agricultural Engineers, Farm Technicians, Veterinary Medicine, Fish Doctor, those related in Biotechnology, Nanotechnology, and related science discipline that promotes the reality that food production, plant and animal breeding as well as fisheries involve science, technology and innovative approach especially nowadays where state-of-the-art and cutting-edge technology is progressing rapidly.

According to Dr. Fe L. Porciuncula, CLSU VP for Research, extension and training and Dr. Gaboy, the AGRISIKAT project will involve Superintendents, Supervisors and Principals of the 5 Districts in Nueva Ecija namely the Districts of Gapan, the District of Cabanatuan, the District of San Jose, the District of the Province of Nueva Ecija and the District of the Science City of Munoz also will serve as preparation to the move of DepED to upgrade their K-12 track on STEM (Science Technology Engineering Mathematics) to STEAM (Science Technology Engineering Agriculture Mathematics) also were present at the singing along with PCAARRD was represented  by Dr. Melvin B. Carlos, OIC ODED-ARMSS, the National Media and www.diaryongtagalog.net

DISTRICT 1, BULACAN-GRADUALLY, the towns covered by the first congressional district of Bulacan namely: Malolos City, Paombong, Bulakan, Hagonoy, Calumpit and Pulilan is slowly becoming a hub for aquaculture and fisheries says Regional Director for Central Luzon (Region 3) for the Bureau of Fisheries and Aquatic Resources of the Department of Agriculture (BFAR DA) Willie Cruz.

Ina press conference coinciding the continuation of the 5-day Central Luzon Aquatic, Agriculture and natural Resources Research and Development Consortium (CLAARRDEC) held at the Central Luzon State University in Munoz Nueva Ecija, members of the consortium vow to boost the competitiveness of Tilapia (mudfish) and Bangus (milkfish) as exemplified by their theme ”Central Luzon: Modernizing Agriculture for Prosperous Farming Communities” along with usual products from the region such as Rice, Onion and Garlic from Nueva Ecija which according to its 1st district Board Member, the Actor Rommel C. Padilla, the Provincial Government of Nueva Ecija have ways of protecting the industry against smugglers which has a profound impact on the economic activity of the region and the nation.

While the Carabao o Dinamulag Mango from Zambales,sweet potato from Tarlac, Bangus and tilapia from Pampanga, coconuts and fruits from Aurora, mangoes from Bataan and aquaculture from Bulacan but according to the fisheries Bureau in the region aside from Tilapia and bangus which was highlighted at the FIESTA, they are exploring ways to boost the production of shrimps, shellfish like oysters, muzzles and clams and the fresh water crab from Calumpit and Pulilan, the “Ulang”.

The Philippines could be an economic power in terms of aquaculture and fisheries because we are a maritime nation and surrounded by water, the Bureau in the region as part of their continuing mandate to promote the fisheries and aquaculture and making it sustainable they are also tasked to find ways on how it can be competitive. In the Tilapia congress where they introduce the “TILADING”, PCAARRD was represented by its Director of the Applied Communication Division Ms. Marita A. Carlos.///Michael N. Balaguer, 09333816694, michaelbalaguer@diaryongtagalog.net