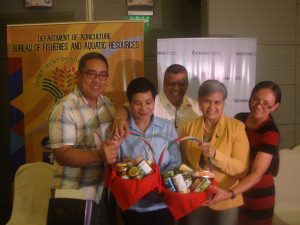 Aquaculturist Virgilio Marzo says government should understand the behavior of sardines before it could craft a viable National
Management Framework Plan (NMFP) for the species, which is the basic food of tuna.
Marzo, who took up fisheries at the University of the Philippines (UP) stressed that the end of the El Nino cycle normally leads to the skyrocketing population of Peruvian sardines and anchovies, both of which are needed as well by the global aqua feed industry.
Two years ago, Peru had to impose a closed season for sardines and anchovies afternoting that the catch dwindled to only 1-million metric tons (MMT), an indication that the warming sea surface was pushing the fish species out of their habitats.
Marzo also argued that government experts have to update their assessment of the biomass of sardines, which tend to dominate certain areas with the higher latitudes like those affected by the Kuroshio-Oyashio current off Japan, the California current in the US, the Northwest Atlantic on the
US East Coast and the Northeast Atlantic off Spain and Portugal.
The Humboldt current off Peru is a very productive anchovy and sardine area, headed, like the Australia-New Zealand current, the Argentina-Brazil current and South Africa. Citing the March 7, 2017 article of Dave Checkley of the Scripps Institute of Oceanography, Rebecca Asch of Princeton University and the East Carolina University and Ryan Rykaczewski of the University of South Carolina entitled “Climate, Anchovy and Sardine” that was also carried by the Annual Review of Marine Science, the authors stressed that sardines and anchovy have common habitats, and both have shallow life histories but deep evolutionary lineages.
Checkley, Asch and Rykaczewski found out that sardines and anchovies
evolved upwards of10 million years, with their populations stabilizing in 500,000 years after some species were wiped out and new ones were developed.Sardines and anchovies are good sources of Omega 3 and Omega 6, which are needed for the faster group of other fish species, like tuna and other pelagic varieties, and these make them the prime targets of large fishing fleets and companies producing aqua feed.
The authors claimed that the two fish species have evolved similar traits as they grow faster, share some anatomical features and behavior.
Checkley, Asch and Rykaczewski stressed that while the smaller anchovy feeds on larger particles, sardines are nourished by phytoplankton that are nurtured by the upwelling of sea currents, with more nutrients from the depths of the sea being carried towards the surface, and they migrate long distances.Their populations are relatively young but the biomass changes due to climate variation, they added.
Based on their analysis, the Peru anchoveta (anchovies) has the highest biomass in the world at 23 million metric tons (MMT), Japanese sardine follows at around19 MMT, the Humboldt sardines number about 12 MMT and the Benguela sardines of Africa at 11 MMT, Cape anchovy at 7.5 MMT, anchoita in Brazil-Argentina at 5MMT, Japanese anchovy at 4 MMT, Pacific sardines at 3.8 MMT and the Northern anchovy at 2 MMT.
Marzo said the authors noted that certain species dominate when sardines and anchovies are mixed, with the Peruvian anchoveta much bigger than the
Sardine population while Japanese sardines tend to be more numerous than
Japanese anchovies.
On the other hand, the Benguela sardines are far bigger in population than the Cape anchovy in South Africa while the biomass of Pacific sardines is greater than that of the Northern anchovy.
InBrazil-Argentina, anchoita had a bigger biomass than sardines.For sardines and anchovies to grow in huge volumes, Marzo said government should study how nitrogen sources could be induced to seep into the sea through the rivers to nourish both the anchovies, which is a coastal species, and sardines,which dwell offshore and relies on upwelling to
sustain their biomass.
He argued that mitigating global warming, ocean acidification and reducing the contamination of rivers by toxic chemicals and heavy metals that kill marine life would help shore up the populations of sardines
and anchovies.
Marzo noted that it is only in the waters in Northern Luzon where
decent populations of anchovies exist, while the outflow of nutrients from
Philippine rivers to the sea would necessarily perk up the movement of
sardines. /// MARVYN N.BENANING