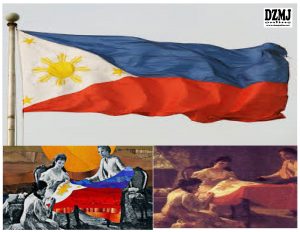 MAARRDEC is now officially the 16th R&D consortia, which will focus on the region’s agriculture, aquatic and natural resources R&D concerns addressing specific needs such as in biodiversity, (e.g, Tamaraw conservation), and marine and freshwater ecosystems.

Its establishment recognizes the unique socioeconomic and geographical features of its five provinces – Occidental Mindoro, Oriental Mindoro, Marinduque, Romblon, and Palawan (MIMAROPA) which remain largely agricultural and coastal. Its island provinces as either major or emerging tourism hubs with the potential to drive economic growth through agri-aqua and ecotourism development.

As an R&D network, it aims to address key challenges in the region’s AANR sector through strategic R&D, capability building and governance, R&D utilization, and policy analysis and advocacy; serve as a venue for joint planning, monitoring, evaluation, and sharing of resources through collaborative interventions among member agencies; and harmonize and synchronize R&D activities and efforts for broader impact to the region. 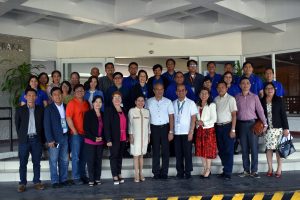 Monsanto PH, Catholic Women’s League extend support
to abandoned elderly in Laguna
Monsanto Philippines recently partnered with the Catholic Women’s League- Immaculate Conception Parish of Los Baños (CWL-ICP) to reach out to the abandoned elderly of Bahay ni Maria in Calamba, Laguna. Monsanto employees together with the officers and members of Catholic Women’s League brought cheer to the elderly residents by giving love donations and serenading them with songs.
Monsanto’s Corporate Engagement Lead Charina Ocampo said “we exert effort to reach out to marginalized groups such as abandoned elderly and people with disabilities because they are an integral part of our society. We interact on a personal level and not just provide donations because they also have emotional and psychological needs.”
The employees together with the members of CWL-ICP entertained the residents with a short program and shared a pleasant meal with them. Monsanto also donated hygiene kits, pillows, and sacks of rice to the residents.
Sister Queenie, one of the Missionary Sisters of Our Lady of Fatima who have been taking care of the ‘Lolas’ at Bahay ni Maria, said “we are indeed thankful to Monsanto Philippines and CWL-ICP for taking their time and effort to visit us and bring joy to our Lolas.”
The Catholic Women’s League is a Roman Catholic lay organization whose objectives are to be of moral and religious influence to society in general. President of CWL-ICP Los Baños Chapter, Ms. Millet Catedrilla also expressed her gratitude for the opportunity to partner with Monsanto Philippines for such a meaningful cause. “It is our first time to do an outreach activity in partnership with a private company and we are very glad that we were able to extend assistance to the elderly residents of Bahay ni Maria with the help and initiative of Monsanto Philippines,” Ms. Catedrilla highlighted. 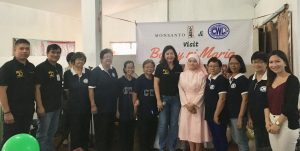 Meanwhile, Monsanto Philippines sells Bt corn which is a transgenic crop. It may be recalled that in 2009, a Vatican study endorsed transgenic crops. The study stated “in light of eight years of experience with growing transgenic crops, many additional field trials, and many additional published research reports, the conference concluded that the scientific evidence is overwhelming that transgenic crops improve the lives of the poor and offer additional significant improvements in their lives in the years to come.”
###

Monsanto Philippines partnered with the Catholic Women’s League- Immaculate Conception Parish of Los Baños (CWL-ICP) to reach out to the elders of Bahay ni Maria in Calamba, Laguna. During the visit, Monsanto employees together with the members of CWL-ICP serenaded the residents with some songs, while also donating basic necessities such as hygiene kits, pillows, and sacks of rice.

###
About Monsanto Philippines
Monsanto Philippines is a local unit of Monsanto, a Fortune 500 global power company with a diverse portfolio of advanced biotechnology products produced in 404 facilities in 66 countries. To date, Monsanto Philippines has four facilities spread out across the country, which includes its head office in Alabang, a Refuge-in-a-Bag (RIB) Plant and cold warehouse located in Bulacan, and an R&D station in Mindanao. The company also has partnerships with the Philippine government through the Department of Agriculture as well as the local scientific and academic communities in the promotion of modern agricultural biotechnology. To learn more, please visit www.monsanto.ph.

About Monsanto
Monsanto is committed to bringing a broad range of solutions to help nourish our growing world. We produce seeds for fruits, vegetables and key crops – such as corn, soybeans, sorghum, canola, and cotton – that help farmers have better harvests while using water and other important resources more efficiently. We work to find sustainable solutions for soil health, help farmers use data to improve farming practices and conserve natural resources, and provide crop protection products to minimize damage from pests and disease. Through programs and partnerships, we collaborate with farmers, researchers, nonprofit organizations, universities and others to help tackle some of the world’s biggest challenges