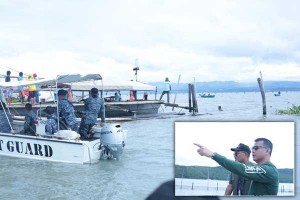 Joint forces of the government led by the Department of Environment and Natural Resources (DENR) and the Laguna Lake Development Authority (LLDA) have started the massive dismantling of fish pens in Laguna Lake in compliance with Pres. Duterte’s directive to clear the lake of illegal structures and to allow small fishermen to gain access to traditional fishing grounds.  Inset photo shows LLDA General Manager Joey Medina and DENR-National Anti-Environmental Crime Task Force chief Arturo Valdez (left and right, respectively) supervising the clearing operations as workers take down kilometers of fine-mesh nets and heavy-duty poles of bamboo and anahaw enclosing a huge fish pen in Binangonan, Rizal.  Also in photo are personnel of the Philippine Coast Guard tasked to provide security to the operation. ###

The Department of  Environment and Natural Resources (DENR) will conduct a two-day workshop aimed at developing a framework for the management of Benham Rise, the Philippines’ resource-rich territory off the eastern coast of Luzon Island.

The workshop, slated for February 2-3 and organized by DENR’s Biodiversity Management Bureau (BMB), will bring together policymakers and experts in a bid to come up with a policy framework for the protection and sustainable management of the undersea region.

The discussions will focus on resources in the region including biodiversity, fisheries, mineral, oil and gas; existing policies governing the area, and alignment to the Sustainable Development Goals and Philippine Development Plan, among others.

Resource persons include BMB officials led by Director Theresa Mundita Lim, who is expected to speak on the thrust towards the sustainable management of the Benham Rise, Dr. Vincent Hilomen on the general overview of the region, and Ms. Armida Andres on the framework’s alignment in the Sustainable Development Goals and the Philippine Development Plan.

Experts from the University of the Philippines are also expected to share their knowledge and expertise on the Benham Rise during the workshop.  Leading them is Dr. Mario Aurelio of the National Institute of Geological Sciences (NIGS), who will share the successful strides made by the government on claiming the region under the UN Convention of the Law of the Sea or UNCLOS; Atty. Jay Batongbakal of the Institute for Maritime Affairs and the Law of the Sea on existing policies governing the Benham Rise.

Dr. Cesar Villanoy of the UP-Marine Science Institute will make a presentation on the physical environment of  Benham Rise while Dr. Hildie Nacorda of the UP-Los Baños in Laguna will tackle the biodiversity resources surveys made in the Benham Rise in 2014 and 2016.

Dr. Carlos Primo David, also of UP-NIGS, will present the mineral, oil and gas resources of the region, while Commodore Eduardo Gongona of the Bureau of Fisheries and Aquatic Resources will talk on the fishery resources.

Benham Rise is claimed as the largest marine area of the country that remains relatively pristine. With the recent recognition of Benham Rise as part of the Philippines’ territory  and extended continental shelf (ECS) granted by the United Nations Commission on the Limits of the Continental Shelf (UNCLCS) in 2012,  interest in utilization of Benham rise increased.

Development of a sound sustainable management framework for Benham Rise would give the Philippines opportunities to develop its marine scientific research capabilities, provide an anchor for mobilizing offshore resources and management in the eastern seaboard of Luzon, and establish the basis of Philippine control and management of seabed exploration activities in the EEZ, continental shelf, and extended continental shelf.

The recognition of the Philippine jurisdiction over the Benham Rise Region is the Philippines’ first successful validation of a claim in accord with the 1982 Law of the Sea Convention (UNCLOS). It is the first major expansion of the Philippines’ maritime boundaries since the late 1970s when it declared its exclusive economic zone (EEZ). The waters above the ECS are considered as high seas.

The Department of Environment and Natural Resources (DENR) has deployed 30 units of chainsaw to help speed up the clearing operations in areas devastated by Typhoon Nina on Christmas Day.

“This is to assist our local government units (LGUs) and the Department of Public Works and Highways in the clearing operations and in harnessing fallen trees cluttering in roads, which affected the delivery of relief assistance to affected communities,” said DENR Undersecretary for Field Operations Isabelo Montejo.

Nina battered the Bicol region and parts of Southern Tagalog and Samar Island, leaving six people dead and a trail of destruction in its wake. It has been described as the strongest typhoon to strike the Bicol region in 10 years.

According to Montejo, the DENR regional directors in affected areas have been ordered to coordinate with the LGUs to facilitate the deployment of chainsaws, which were earlier confiscated by the DENR for lack of permit or registration.

“We are also now coordinating with other government agencies and non-government organization partners as we try to pull out all other resources of the department to facilitate other assistance we can provide,” Montejo added.

The DENR encouraged making use of the uprooted trees to build temporary shelters for typhoon survivors. It also promised to provide assistance to affected DENR employees.

Tall and big trees, including coconut, can be used to repair damaged buildings, houses and other structures.

Meanwhile, the DENR also directed the regional offices in Calabarzon, Mimaropa, Bicol and Eastern Visayas to conduct damage assessment in planting sites under the National Greening Program for possible rehabilitation and replanting efforts. ###

In a recent dialog with community relations officers (CROs) of some of the country’s biggest mining companies, Lopez expressed  hope that the mining companies would take a hard look at SIAD as a key to strengthening the SDMP.

“What I want to do with the SDMP fund is for the DENR to jointly manage it with the mining companies and the community. I want to use their funds in the area development approach for more impact,” Lopez said.

Among those present in the meeting were CROs of OceanaGold Philippines, Philex Mining Corp., FCF Minerals, Holcim Philippines, and Lafarge-Holcim Aggregates Inc. The CROs are the mining firms’ frontliners, conducting consultations with communities affected by their operations.

The dialog was the first of a series of nationwide consultations with mining stakeholders being conducted by the Department of Environment and Natural Resources (DENR) as it is currently in the process of reviewing the guidelines on the formulation and implementation of SDMPs by mining firms.

SDMPs are provided for in DENR Administrative Order No. 2010-21, which is the implementing rules and regulations of Republic Act No. 7942, or the Philippine Mining Act of 1995.

Lopez said a revision of the SDMP guidelines was necessary to address some concerns about the implementation of certain programs, including lack of community counterpart and weak coordination with local development plans, thus resulting in wastage of SDMP funds.

A precondition to starting a mining operation, SDMP is a five-year plan carried out during the life of the mine to bring about a sustained improvement in the living standards of the host and neighboring communities.

It serves as a partnership between the mining operator and its host and neighboring communities meant to provide alternative livelihood opportunities for mine workers and their families.

Under this setup, at least 1.5 percent of the total mining and milling costs of the company is monetized and placed in a trust fund for affected communities.

Of the amount, 75 percent must be spent on community-development programs; 15 percent on mining technology and geosciences advancement programs; and 10 percent on information, education and communication program.

“The SDMP funds should not be limited just to the host communities. Of course, they’re the ones you should take care of. But if used well, you don’t need to take care of them anymore because they will use their own money. Then you will widen the scope of the areas you can help,” she said.

SIAD, according to her, creates sustainable mini-economic zones that could generate employment and livelihood activities in mining communities.  ###