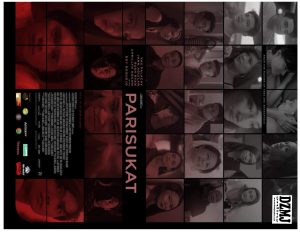 MIRRORS THE OTHER SIDE OF LIFE
The PARISUKAT Movie Critique

SET upon the dark alleys and pathways of the modern urban landscape are four stories packed into one which indirectly mirrors the other side of life. Four episodes with destictive tapestry of gothic and grotesque interpretation of a typically mediocre predicament portrays a picture of the Filipino’s superb world class acting.

Bullying has has serious repercussions in the life of a child, happening in early childhood it will be carried over up to his or her adolescence or adult life and in the first story it has brought up disastrous consequences. In the real world though, school officials in cooperation with parents and fellow students were able to avert certain acts of bullying and were able to assess the root of the problem and find solution.

Schizophrenia is a serious mental illness characterized by having dual personality where one dominates the other ergo ordering the other to do things against his will another word for it is what others call “Devil’s Advocate” some schizophrenic persons were able to balance their personalities choosing to follow only the good side but still the “Demon” inside lurks in the background waiting for the proper time to intervene.

In the second episode of the movie, the viewer may find the trigger to be the situation where the protagonist/antagonist was talking to himself narrating how he has witnessed the infidelity of his dearly beloved a situation so disappointing especially since the protagonist/antagonist character has built his world around his dearly beloved whom eventually became a serial murder like that of the infamous “jack the Ripper”.

Cannibalism is a practice widely accepted in other parts of the world especially those whoa re barbaric and uncivilized but unknown to many, it has thrived in Europe up until today, in some parts of China where cadaver from the local morgue are ingredients at noodle delicacy consumed by people of all walks of life never knew that what they are eating is dead people.

In the movie, the actors portray a serial killer type of “modus operandi” were in they will lure the victim in to their lair and the murder will take place there. In the real world jack the ripper was never caught but that doesn’t mean he staged a “perfect crime”. The American saying “what goes around comes around”. By now in certain countries, cannibalism is outlawed either punishable by the Electric Chair, Leathal Injection or worst “firing Squad”.

I notice the lady protagonist are surrounded by LGBT people, in the last episode on the movie PARISUKAT i really though that “Jinky” the character is a girl, gay guys including his best friends character in the movie admired him for being lady like. The truth is, LGBT people are gaining respect nowadays, they has moved away from the typical “parlorista” but then the attack of the Director Carlo Alvarez is different for he still put the character of Jinky at a job where most LGBT people work, at the television production.

Perfectly executed, the twist and flashback are very much inter related although seen multiple times, the dark alleys, dim lights and night settings are perfect for a suspense movie. Though the movie has theme with more violence, some sex and taboo, it relects the mind and insight of the writer and director who has superbly made his masterpiece.///michael balaguer, 09333816694, michaelbalaguer@diaryongtagalog.net

Pasay City – The Technology Application and Promotion Institute of the Department of Science and Technology recently held the National Technology Transfer Day 2019 on 04 April 2019 at the Philippine International Convention Center, Pasay City.

The National Technology Transfer Day provides the necessary mechanism in speeding up the transfer and commercialization of funded and generated technologies of the Department by virtue of the Republic Act (RA) 10055 or the Philippine Technology Transfer Act of 2009.

“We realized that the objective of RA 10055 in the speeding up and cascading of technologies generated from publicly funded research and development (R&D) into the market fell into our hands to challenge the current system by creating innovative infrastructures for the benefit of the ordinary Filipino population,” said DOST Secretary Fortunato T. de la Peña during the keynote speech.

“The technologies we present today focus on the five-pillar innovation ecosystem which provides great contribution in raising the country’s performance in the Global Competitiveness Index by the World Economic Forum,” added De La Peña.

The new format of the Technology Transfer Day supports the provision of a platform for recognition and dissemination of top and recent DOST breakthroughs which have potential significant impacts for global competitiveness.

“Businessmen may not have the patience to wait that long in order to obtain a clearance before they can finally get a license from government-funded technologies,” said DOST-TAPI Director Edgar I. Garcia during the Technology Transfer Day Rationale.

“It is for this reason that we have our industry-based ideal licensing or spinoff terms that you may be interested to use, where we can substantially reduce the time of waiting from 60 to 90 days, to one to 15 days,” added Garcia.

Since the conception of the Technology Transfer Day in 2016, six technologies were commercialized by seven adoptors all over the regions.

This year, a total of 21 technologies were pitched to possible investors and adoptors.

Moreover, the program also highlighted the ceremonial signing of the amended implementing rules and regulations of RA 10055 between DOST represented by Secretary De La Peña and the Intellectual Property Office of the Philippines represented by Director General Josephine R. Santiago. 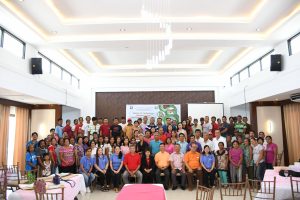 Batac, Ilocos Norte – Through the Series of Technology Demonstration and Fora on Agri-Related Technologies, the Technology Application and Promotion Institute of the Department of Science and Technology (DOST-TAPI) facilitated the promotion of agriculture, aquatic, and natural resources (AANR) technologies in Ilocos Region on 29 March 2019 at the North Stellar Hotel and Events Place, Batac, Ilocos Norte.

In partnership with the Philippine Council for Agriculture, Aquatic, and Natural Resources Research and Development (DOST-PCAARRD), the technology demonstration and fora became a venue to present the latest technologies in AANR among possible adoptors including agri-entrepreneurs, farmers, and fisher folks.

Participants of the Series of Technology Demonstration and Fora on Agri-Related Technologies on 29 March 2019 at the North Stellar Hotel and Events Place, Batac, Ilocos Norte

“The collaborative efforts between DOST-TAPI and DOST-PCAARD bring the necessary technologies needed by our stakeholders in improving their agricultural production and operations especially in the countryside,” said Eilleen S. Fernando, Project Leader and Supervising Science Research Specialist of DOST-TAPI.

Aside from the technologies’ applications, technology transfer and adoption requirements and procedures were discussed during the demonstration and consultation among interested agriculture investors.

“With the pellet feeds, goats are ensured of continuous growth and right nutrition that would ensure breeders of higher productivity and quality products,” said Vice President for Business Affairs Edgar A. Orden of CLSU.